Laibach: We Forge The Future

Can art change the world? If you know the history of Laibach, then you also know that the answer to that question is 'yes'. Laibach undoubtedly had an important influence on the history of Yugoslavia and the Slovenian state in the 1980s. And this record - 'We Forge The Future', available on CD and vinyl - is proof of that.
On the disc, you will find a recording from 2018 that was intended to be a new performance of the controversial concert that Laibach gave on April 23, 1983 at the XII Music Biennale in Zagreb, the capital of the Croatian state. It was a turning point in Laibach's career, and the group would receive a lot of criticism as a result. But it was precisely this course of events that made Laibach legendary.
Yugoslavia
Before we look at that performance, I would like to give some historical context. After all, Yugoslavia held a special place in the cold war. After a few years of conducting himself as a fine student of Stalin, the Yugoslav leader Tito broke with the Soviet Union in 1948, and with that, in fact, with all the other Eastern Bloc countries. Tito co-founded the Movement of Non-Aligned Countries, an association of countries that did not want to take sides between the two superpowers in the Cold War.
This led to a relatively more liberal policy in Yugoslavia, although the country remained a one-party dictatorship that sent dissidents to prison. Not only as a result of liberalism, but also because of economic necessity and the isolation the country was in, Yugoslavia was very open to Western European culture. Records of many Western rock groups were thus freely available, as were Western films and other cultural products.
Slovenia, the northernmost state of Yugoslavia, was even more liberal, partly because it was more prosperous economically and partly because it operated on the periphery of the Yugoslav federation, where more was possible. Thus, in 1969, Radio Študent was born, an independent radio station resulting from student protests at the University of Ljublijana a year before. Radio Študent operated under the wings of the ZSMS, the Union of Socialist Youth of Slovenia, affiliated with the ruling communist party.
Also affiliated with the ZSMS was the ŠKUC, a cultural organization founded in 1978 that, among other things, released the Sex Pistols record in Yugoslavia, and organized exhibitions and concerts by alternative artists. But all this also arose at a time of increased authoritarianism as a result of nationalist aspirations of young people in the federal states (especially after the Croatian Spring). The ZSMS increasingly became the mouthpiece of the disatisfied Slovenian youth.
This is the context in which Laibach came to the fore in 1980. Laibach's first event, a few months after its founding, was immediately banned after the group pasted lurid posters in their hometown Trbovlje. It took until 1982 before Laibach could perform for the first time in Ljubljana, the capital of Slovenia. This too was not without a struggle, because the name Laibach was the German-language name of Ljubljana, a name that evoked memories of the Nazi occupation and the colonialism of the Austro-Hungarian Empire.
The performance 'Mi kujemo bodočnost' - We Forge The Future - took place in April 1983 in Zagreb, the capital of the Croatian state. Here too, Laibach already had a bad reputation. After a performance by Laibach at the 1982 Yu-Rock festival in Zagreb, the group was questioned by the military police for using real military smoke bombs as visual effect during the show, causing considerable difficulties for musicians and audience.
Ten days after this concert, singer Tomaž Hostnik committed suicide by hanging himself on a kozolec, a kind of drying structure for hay that is sometimes seen as a national symbol of Slovenia. The group condemned the act and posthumously fired Hostnik from Laibach. Still, Laibach would regularly pay tribute to Hostnik in the future, as we'll see later.
Also in Zagreb, an exhibition of Laibach Kunst – Laibach's visual arm – was banned after a few days because of the shocking images. But the biggest scandal was the performance at the Zagreb Music Biennale. This festival was highly regarded because - as the conditions in Yugoslavia allowed - it invited both Western and Eastern musicians. The festival was mainly based on contemporary composers, but in 1983 the organizers decided to schedule two evenings with avant-garde rock groups.
Music Biennale
However great the freedoms in Yugoslavia were in comparison to other communist regimes, Laibach managed to cross the lines. The problem was not so much the inscrutable industrial music, and the uniforms and visual references to fascism might also have been possible. It was the projected videos that went too far.
As the festival represented high-quality culture, Laibach decided to turn it into a multimedia show with 10 different screens. On it, they showed their experimental film 'Morte ai s'ciavi' (Death to the slav[e]s). The group also showed the agitprop film 'Revolucija še traja' (The revolution is still going on), a documentary retracing the history of Yugoslavia since the Second World War, simultaneously with a porn video.
When at a certain moment a speech by Tito coincided with images of a penis, the organizers broke loose, because the images were undoubtedly also seen by the police informants in the room. Since there are different versions on the internet about the events that night, we decided to ask for the experiences of someone who was definitely there that night, namely Laibach chief ideologist Ivan Novak:

‘The whole event for the Music Biennale with Laibach, Last Few Days and 23 Skidoo started at 24:00. Last Few Days was the first group to play, and it went through well. Laibach was second, around 2am, and we managed to play the show from beginning to end also. But because of our show, and especially the film projections, the police and later even the military arrived soon and they interrupted the concert of 23 Skidoo.
As far as I remember they were not even allowed to go on stage. We decided to go on nevertheless. The three bands took the stage and we would jam together as long as they didn’t pull us off by force, which eventually happened around 4 AM or even later, when the electricity was turned off and the audience had to leave the venue as well.
There were about 1000 people in the room, maybe more. I believe they were astonished from the whole show and to certain extend also entertained by the entire circus that happened when police arrived.’

Someone who wasn’t able to enjoy the show was organizer Igor Kuljerić. He is said to have suffered a nervous breakdown as a result of the performance and fled to the Croatian island of Silba to seek peace and avoid legal prosecution. Thanks to the intervention of a number of high-ranking party members – including Ivo Vuljević, then director of the Vatroslav Lisinski concert hall – the consequences for the festival were fortunately limited. Still, the Croatian government would protest to their Slovenian counterparts about the concert.
Panic in Slovenia
Three weeks after the performance, Laibach published its manifesto - Action in the name of an idea - in Nova revija, a literary magazine from Slovenia (which had announced at its inception that its goal would not be action in the name of an idea). In reality, the text was already written in 1982 with the input of Tomaž Hostnik, among others.
A few quotes:
Laibach thus adopts the ideological goals of the Yugoslav regime, in what is sometimes referred to as 'over-identification' or 'over-affirmation'. Laibach poses as the biggest fans of the Yugoslav system, but in doing so also undermine the system, by letting their identification go together with a lot of references to Nazism and by pushing their totalitarianism to a point where it becomes absurd.
Television star Jure Pengov thought it was time to teach the band a lesson. He interviewed Laibach in his TV Tednik program, which was broadcasted immediately after the television news. In the interview, we can see Laibach in military uniforms, looking straight ahead, with totalitarian posters behind them (recorded in the ŠKUC gallery, the gathering place of underground Ljubljana that operated under the auspices of the communist youth league).
The interview refers to the scandalous performance in Zagreb, and to the reaction of the organizers who claim that Laibach promised to refrain from provocations and did not keep that promise. Apart from that, Laibach just continues to play its totalitarian parody:

‘Happiness consists in the complete suspension of one's own human identity, in consciously giving up one's personal taste, conviction, judgment, in voluntary depersonalization and the ability for self-sacrifice, identification with a higher, superior system - with the multitude, collective, ideology.’

Laibach also repeats the statement ‘Art is a sublime mission that requires fanaticism’ several times, including when they are reminded of the suicide of their former singer. This is a quote from Hitler that is included - of course without citing the source - in their discourse, just as Laibach often incorporates references to all kinds of political or artistic figures in its works.
At the end of the interview, Jure Pengov, the interviewer, rhetorically asks whether someone will finally act against these dangerous ideas and expressions. The answer came quickly. On June 29, 1983, the municipality of Ljubljana announced a ban on the use of the name ‘Laibach’. Performing under this name is therefore no longer possible, and Laibach is de facto banned in Slovenia.
We Forge The Future 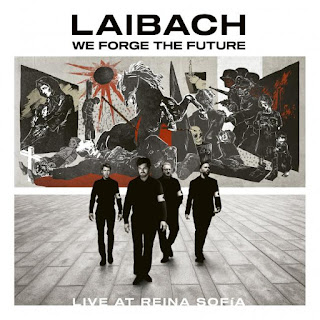