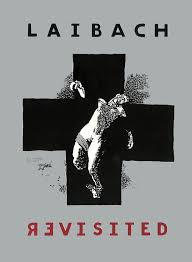 ‘Laibach Revisited’ is an elaborate addition to the first Laibach record from 1985, and consists of 3 CDs, two booklets and a pin in a box, all beautifully designed in a memorable Laibach style. In the early years of the group, Laibach was an absolute sensation in Slovenia, then still a republic of Yugoslavia. The name referred to Ljubljana, the capital of Slovenia, but in German.

‘To call a group Laibach Art in a nation that arose exclusively out of struggle - ultimately war - against German political and cultural expansionism (not just the Nazis) is, to say the least, scandalous. No greater Dadaist twist could be possible. The name of the group is it's most successful poetic idea,’ said Slovenian writer and philosopher Taras Kermauner, as the name was reminiscent of the Austrian occupation and - even worse - the Nazi occupation of Slovenia during World War II, and all it’s horrors.

Laibach’s first performance - along with an exhibition, a film screening, and three other bands - in their hometown of Trbolvje was banned as soon as the group posted gloomy posters in the city. The application for the concert was not formulated correctly, the authorities argued. The group would later claim that the performance was a test of the Slovenes’ positive awareness - as there had been a few government tests before - and that the performance was intended to be banned.

After their military service, Laibach returned to the front, but their first performance in Ljubljana in 1982 immediately provoked reaction. ‘Is it possible that someone permitted, here in Ljubljana, the first hero city of Yugoslavia, a youth group to take a name that forcefully unearths bitter memories of… Laibach,’ said a protest letter. A letter that the group then conveniently played out. Because negative publicity is also publicity, isn't it?

Some say that a trap was set for Laibach afterwards. But even if it was a trap, the band fell into it consciously and with open eyes. Laibach was invited to an interview on TV Tednik, where they simply continued their totalitarian image and absurd statements. The interviewer concluded with a call: ‘maybe someone will finally act and stop these dangers, these terrible ideas and statements here in Ljubljana.’

Thus, the city of Ljubljana brought up an old decree stating that it was forbidden to use the name of the city - even in its German variant - without permission. The name Laibach was banned from now on. However, the group managed to perform in 1984 without mentioning its name. On the cover of the group's debut, also, we can only see the black cross - within which a tormented individual was wallowing - the symbol of the group, without the mention of the name.

It is this record that we commemorate with this edition. Most of the material was recorded in 1983. Some songs had already been released abroad. Even though the name was banned in Yugoslavia, the group could safely tour Europe under its own name. Given the difficulties, the vinyl debut in Yugoslavia was released only in 1985.

The new box contains this record, but ... actually the content corresponds more to ‘Rekapitulacija 1980-84’, which was released at about the same time in Germany on Walter Ulbricht Schallfolien as a double LP and thus contained much more material than the original record, with songs that were recorded in 1984 and 1985. So you get the maximum content. (And even if you search and think you're missing some song or bonus, those are included in the digital downloads included with this release.) 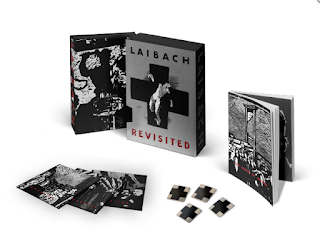 The first CD from this box contains the reissue. It opens - like both records on which it is based - with ‘Cari amici’, a recording from the aforementioned performance in Ljublijana in 1982 on which the then singer of Laibach - Tomaž Hostnik, who committed suicide in 1982 – gave an imitation of Mussolini. The photo showing Hostnik with a bleeding chin - after he had a bottle thrown at his head, and just continued the show - is very famous.

The record also contains very sophisticated noise, which sounds surprisingly good for the time and circumstances in which it was recorded. We hear all kinds of percussion, guitars, but especially a lot of sound manipulation and synths that make the whole sound absolutely ominous. Rhythms are slow, the music atonal and saturated with effects. In short, the oppressive noise of industrial alienation and totalitarian terror.

The lyrics - completely in Slovenian at that time - also sound dark. They expose the contradictions of communism, for example through quotes from Tito (in ‘Država’, a song that lists positive state responsibilities, in stark contrast to the chilling music) and ‘Jaruzelski’ (the Polish general who declared a state of emergency and was responsible for strong repression in 1981). They speak of the bright future they face (‘Sila’, ‘Brat moj’), or of courage and self-sacrifice (until death, as in ‘Ti, Ki Izzivaš’).

The second CD from the box is called ‘Revisited’. It contains renewed versions of the old songs, which were recorded between 2009 and 2012. In the meantime, I have heard these versions live several times, and I was always very impressed. I am therefore happy to finally have it on CD. The songs have obviously been played by musicians who are much better than the ones on the original recordings, and the recordings themselves are excellent.

The new recordings are very different from the originals. The voice of Milan Fras sounds much heavier, the avant-garde piano by Sašo Vollmaier makes it even more ominous, the electronic programming of Luka Jamnik is fuller, the screams of Mina Špiler go through the bone, the drums of Janez Gabrič are more varied… The album also contains some songs that would not appear on the debut album, but only on 'Nova Akropola' in 1986, such as ‘Vier Personen’ and ‘Nova Akropola’. Additionally, you get some more recent live versions with orchestra, including one from the performance of Laibach in the Bozar in 2016 that we could attend.

The third CD contains live recordings, recorded underground in an old mine that was converted into a museum, at a depth of 200 meters. What makes it exceptional are the three founding members of Laibach who participate: Ivan Novak - who rarely plays live despite his important role - and Dejan Knez - a long-time core member who is no longer active in the group, but is responsible of vocals and bass on this record - and finally Srečko Bajda, who played with Laibach in the early 1980s. The record is dedicated to Boško Bursać, who made the recordings and died in 2016. It includes a flaming version of ‘Siemens-Rdeči molk’, a mix of ancient songs played during their first performances, but never recorded in studio. You will also hear drawn-out and psychedelic versions of the songs you already heard on the other two CDs.

And it is not done yet. The edition also contains a book with various texts about Laibach. To begin with, the already known ‘10 items of the covenant,’ which is the manifesto Laibach published in 1983 to outline it's strategy. It contains quotes such as ‘Laibach analyzes the relationship between ideology and culture in a late phase, as proposed in art’, ‘art and totalitarianism are not mutually exclusive’ and ‘all art can become the object of political manipulation, except art that speaks the same language as the manipulation’. Laibach claims to have always adhered to the principles of the manifesto, for which they kept finding new applications.

The second text is the central and longest from the edition. It is called ‘The Terror Of History. How Laibach Shook the State, the Party and Philosophy at the Beginning of the Eighties’ by Marcel Štefančič Jr. It is quite a heavy text, full of quotes and enumerations that are not always explained in detail. It contains more considerations than facts, and may be inaccessible to those who do not already have a certain level of knowledge, including about thinkers such as Slavoj Žižek and Jacques Lacan.

The early 1980s were a time of high inflation and high unemployment in Yugoslavia. Punk and Laibach were excellent lightning rods for the economic crisis. The Slovenian republic was strict on punk (albeit less strict than other communist countries). In 1983, Laibach promoter Igor Vidmar - the man who also writes a preface here for the record he first released in 1985 - was held in custody for a month for wearing suspicious badges (a Dead Kennedy's badge with a swastika crossed out was mistaken as a pro-nazi sign).

However, Laibach confused everyone. Punk could be criticized as a foreign influence, but what should critics think of Laibach? Dissidents could be branded as dangerous to the state, but what to do with a group that proclaimed they wanted to strengthen the state? And were especially secretive about their true ideas? ‘Laibach does not work as an answer, but as a question,’ said Žižek. And those questions kept piling up, while Laibach's true nature remained a mystery.

The last text from the book is by Milan Kučan. He is the man who led Slovenia to independence in 1991, when reform of Yugoslavia seemed impossible, and was president of the new republic from 1992 to 2002. It is a speech given by Kučan at the opening of an exhibition by Laibach in Trbovlje in 2010, exactly 30 years after the group's very first prohibited exhibition in the same place. He also emphasizes that Laibach provoked negative reactions because the work of the group was so difficult to understand. That he gave the speech shows that, today, Laibach is recognized in the highest circles in Slovenia.

So much for the content. The box and booklets are beautifully designed, with numerous works of art displayed in a unified style. The box shows once again that Laibach is one of the most intellectually challenging bands on the planet, and that the group's musical oeuvre may be difficult to fathom, but is definitely worth it.