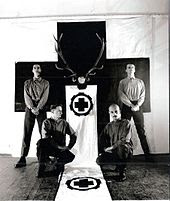 Laibach recently released an extended box: ‘Laibach Revisited’. It is a reissue of their anonymous first album of 1985, augmented with new recordings of the songs and a number of essays about the role of Laibach in Yugoslavia and the Slovenian Republic in the eighties. We were able to interview Laibach several times in the past, but we thought it would be interesting to concentrate solely on their work of the eighties in this interview. Head ideologue Ivan Novak was so friendly to answer our questions.

When you started the band in 1980, did you already have an elaborate idea of the concept of the band? What were your aims back then?

Laibach: We actually did have a general idea that we calibrated between the years 1980 - 1982, when we finally conceptualise it with the 10 Items of the Convent (sometimes also translated as the 10 Items of the Covenant).  Our aims were to create a group that would be more than just a plain rock band, a group, bigger and independent from any genre, a group that would learn from history and define the future. On the side we also wanted to create a movement and a country, our own state - which we partially did.

Your first show in 1980 in Trbovlje was prohibited, and for a while nothing was heard of Laibach. In 1982, Laibach returned to the forefront with several concerts. What made it possible that Laibach survived in these first years?

The Yugoslav army. All of us went to the - then still compulsory - army service between 1980 and 1981. As soon as the first members returned from it, the band started with shows. Others joined as soon as they finished their service. The Yugoslav Army gave us food, gave us boots and uniforms, some sense of resistance, and plenty of ideas. 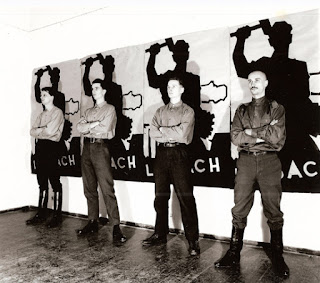 The ‘Ten Items Of The Convent’ were published in Nova revija in 1983. Nova revija was known as a dissident cultural journal and later played a role in the rising national sentiment in Slovenia. Was the text intended to be published by Nova revija? What attracted you to this magazine?

When Nova revija was established in 1982, the editorial board wrote a program, a manifest, in which they stated that they would not act as an ‘action in the name of an Idea’.  We have therefore immediately titled our contribution exactly as an ‘Action in the name of an Idea’. The Nova revija editorial board hesitated to publish our contribution, but philosopher Taras Kermauner insisted that the article should be published no matter what and he proposed to write a kind of editorial essay on Laibach along with our contribution. Which he did, and to this day his text is still one of the most lucid interpretations of Laibach. Soon after our manifest was released in Nova revija, the authorities banned Laibach for several years, but Nova revija was able to publish a more radical content from then on.


In the text ‘The Terror Of History’, that is included in the ‘Laibach Revisited’-box, we learn about the Nazi-punk scandal in Slovenia at the beginning of the 80s. What was the scandal about? In what ways did the scandal and the repression surrounding it affect Laibach?

In short Nazi-punk scandal was an on-going series of events, connected to the Slovenian punk and alternative or sub-cultural movement, of which Laibach was important part of in the first half of the 80s.  The authorities were trying to suppress the whole scene, presenting and accusing it as a movement propagating Nazi ideas. Some bands were dismantled, some people were jailed and Laibach was banned. 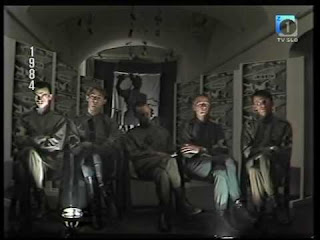 The TV Tednik interview – at the end of which the interviewer called for action against Laibach – is very famous. Some say it was a trap, and I believe you went into that trap well aware of the danger. Why did you agree to do the interview?

We were offered the prime time on one of the two most watched TV programmes in that time, so we decided to do it. We knew it was a trap. We wanted to create a kind of ‘living theatre performance’ and at the same time ‘trapped the trapper’.  Which we did. The interview was then very important for the general development of the critical scene in the whole country. People like Slavoj Žižek and many other young intellectuals appeared on the scene after this interview and started to roll the ball of social, cultural and political changes. The interview was like a kind of ignition coil for artistic and political ideas in the 80s.

When the city of Ljubljana banned the name Laibach, how did you react?

We said ‘great, let’s move further’. We immediately decided to get out of Slovenia and start organising the ‘Occupied Europe Tour’. 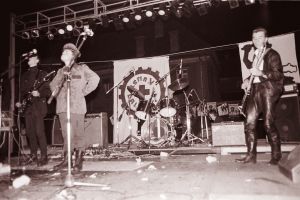 Was it easy to continue touring Europe during the ban on the name Laibach? Did this have repercussions at home?

It was difficult to tour Europe, because we had no experience at all and also hardly any money. And Europe then was still deeply in the Cold War, divided by the wall. Plus it was very much a shitty place.  Back at home they were happy just to get rid of us and they didn’t care what we were doing elsewhere.

Was the creation of Neue Slowensische Kunst in 1984 a reaction to the ban on the name Laibach? How was it possible to make such a move while you could not use your name?

Yes, it was greatly the result of the ban of Laibach. Neue Slowenische Kunst was a movement of a several groups from different media that were inspired by Laibach and when we decided to start working together, Laibach was the central inspiration for the whole movement. The name was based on the historical Slovenian avant-garde movement from the 1920s, presented in the German magazine Der Sturm in 1929 under the name ‘Junge slowenische Kunst’.


Although the name was forbidden, Laibach played a concert in Ljubljana in 1984 and released the first LP in 1985, only by advertising the famous black cross that was your symbol. I guess this meant that Laibach was sufficiently known within the public and the population to make it a success. How were the reactions?

Yes, we did the anonymous concert, announced only with our symbol - the black cross -, which was not forbidden. Therefore everything was basically legal. And also our first album was released without our name, again only with the black cross as the central image.  This was a nice prove about the power that the symbol can represent.  The concert was totally sold out and reactions were, of course, also very enthusiastic and positive. 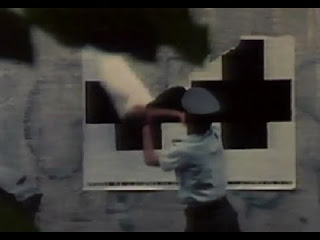 In 1987, you asked for a removal of the ban on the name Laibach. Was it easy to achieve?

We didn’t ask for removal of the ban ourselves; it was a public demand, spread from the alternative circles. In fact the demand was in the end concretised by the Union of Socialist Youth of Slovenia (abbreviated ZSMS) that was a legal (pro-communist) political organization of young people in Slovenia that operated from the post-war years until the 1990s.

Also in 1987, there was the poster scandal. A poster made by Novi kolektivizem – a design studio connected to NSK – for the Youth Day and the birthday celebrations of Tito turned out to be a reworking of an old Nazi poster. At first, the authorities thought of suing Novi kolektivizem, but they later dropped the charges. What happened?

Novi kolektivizem (New Collectivism) is an NSK design group, created by Laibach, Irwin and additional collaborators, practicing in their work a Laibachian method, motives and aesthetics.  The whole Youth Day poster scandal was described many times and you can read it here.  There’s more to it of course but it’s a long story. It is impossible to make it much shorter.  The whole scandal rapidly turned the course of political events in 2nd half of the 80s in Yugoslavia.

‘Opus Dei’, your record from 1987, had a big international impact. But it also had its controversies. If I’m not mistaken, there was court action in Germany because of suspicions of Nazi sympathies. Can you tell us what happened?

When Opus Dei was released, the German wing of Opus Dei, a controversial militant catholic organisation, asked for the album to be forbidden and also wanted to sue Laibach for using the name of their organisation as the title of the album. They had several problems with the album, including the four axes swastika, which we used on the inner sleeve. But this swastika was nothing else than a quote from one of the biggest anti-Nazi artist and activist John Heartfield, so they had to drop the charges on Nazism. And the name ‘Opus Dei’ we also used because the leading song on the album was a remake of a famous ‘Live is Life’ song, written by Austrian group Opus. In the end album was still sold in Germany, but under the counter.