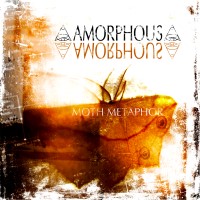 After almost 3 months without any "offline" social music interaction, you would almost forget: there is still such a thing as a dark electro scene. Small and mostly centered in a handful of European countries, but it does exist. I cannot put in words how much I miss traveling to Germany in particular to meet my foreign friends and attend small-scale underground club shows with them. Sure, you keep in touch through social media and some artists engage in live streams, but it is not the same thing. Dark electro is so much more than just a music style: it is a source of friendship across borders.

I have seen Gil Oliveira Santos 3 times in person so far. On 2 of these occasions, he was on stage himself; the last time we were watching a Placebo Effect show together at a club in Madrid. Actually, I had hoped to see him on stage on the third occasion as well, because Amorphous is great live. One could witness that at his performances at Lauscher vs Oldschool (Erfurt) in 2018 and Dark EBM Souls (Bratislava) in 2019. In the 90s, Gil was a member of the Brazilian dark electro band Morgue / Morgue Mechanism, so he is definitely not a newcomer. No, he is someone who has heard the call of dark electro after more than 15 years of absence and has returned as a solo artist.

'Moth Metaphor' is the long-awaited fifth Amorphous album and the latest addition to a discography that further consists of 'Behaviourism', 'Shapeshifting', 'Shapeless' and the live recording of the Dark EBM Souls show. It is also the most distinct "old-school" Amorphous release to date. Whereas 'Shapeshifting' still contained a mix of dark electro, EBM, minimal synth and even techno, Gil goes full-on dark electro this time. It is also striking that there is only 1 remix on 'Moth Metaphor' (and only as a bonus track), knowing that 'Behaviourism' and especially 'Shapeless' were mainly remix albums. This time, the emphasis is completely on new work, which is something I can only applaud.

It took me a while before I could really appreciate the new album. 'Kingdom Of Darkness' and 'Unknown Things' immediately stood out for me and I still consider them to be the best tracks. The catchy 'Unknown Things' is also one of my most favourite Amorphous songs of all time. But I struggled a bit more with the rest of the album, especially with the more minimalistic tracks 'Blackout' and 'Episode' and also to a lesser extent 'Wasteland' and 'How It All Goes Down'. In the meantime, I have changed my mind and I do think that 'Moth Metaphor' is generally good, although I am still not a fan of 'Episode', which, with its guitar sound, is too alternative to my liking. 'Secret Place', on the other hand, really appeals to me, especially because of the piano and the compelling singing style, which is something I also noticed in 'Kingdom Of Darkness'. 'Nonlinear Future' is probably the most "trademark" Amorphous track and leans more towards the style on 'Shapeshifting'. Finally, there are 2 tracks without Gil's vocals, more specifically the instrumental 'The Mystery Man' (in which only samples can be heard) and the bilingual spoken word track 'Our Deepest Fear'. The latter is special, as the text is a poem by our very own Jacques Brel, which is read in both its original French-language version and an English translation by the Canadian actor Dennis O'Connor. I had to inquire about it, but Gil has found this rendition on YouTube. So it is not his voice that you hear, although it could have been. As far as I know, he speaks at least 3 languages (English, Portuguese and Spanish).

As the physical release had been delayed due to the corona crisis and the fans had to wait a little longer, Gil has decided to add 3 bonus tracks to the CD. 'Confinamiento' is a Spanish-language song that I would describe as contemporary electro with techno influences. No dark electro, but good nonetheless. 'Kingdom Of Darkness (Empire Version)' is the only remix on this album and is not inferior to the original. Both versions are great, with the remix sounding even darker and more ominous. Finally, 'A New Morning' is a pure instrumental in the ambient style. Personally, I do not like instrumentals and certainly not ambient, but that does not mean it is not well-made.

'Moth Metaphor' is released on a Russian label, but you can also order the CD directly from the artist (Gil lives in England). As always, it is recommended to check out Bandcamp and Facebook.