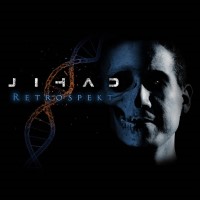 In late 2015, I reviewed the live album 'Live In Bratislava 28.02.2015 - Dark EBM Souls' of the American dark electro act Jihad. It concerned the live recording of a very good performance which I had attended earlier that year at an old-school electro festival in Slovakia. Jihad, which has been the solo project of James Mendez for a considerable amount of time, has an interesting history that I had also covered back then. I am not going to repeat it here, but I gladly refer you to my review, where you will find the relevant background information. The crowd at Dark EBM Souls had the privilege to witness 2 exclusive tracks, '(I Can't) Let Go' and 'Visions', which have finally gotten a studio release after more than 5 years, along with 8 other new tracks. The result is 'Retrospekt', the first real album of Jihad in almost 25 years.

This release had been shaped over a very long period of time and this is something you can hear. There is a clear distinction between the classic 90s dark electro sound in the "older" tracks 'The Prophecy' and 'Degree Of (Im)Morality' and the more mellow and contemporary sound in the "newer" tracks. The aforementioned "older" songs are the highlight of the album and I am sure that I am not the only one who sees it this way. I was already familiar with 'The Prophecy' from 'EAR Mixtape Volume 1', a digital compilation by Electro Aggression Records which I reviewed in 2013. This track was thoroughly reworked and the final version on 'Retrospekt' is even better than its predecessor in my opinion. On a side note, the artwork on the album sleeve somewhat reminds me of the 'Terminator' theme of this song. 'Degree Of (Im)Morality', in its turn, contains certain references to Christianity and is a lovely and highly melodic dark electro song. I hope that James will play it live someday, but I think there is a bigger chance that 'The Prophecy' will be included in the setlist of his future shows. Not that you will hear me complain.

Regarding the "newer" tracks, my preference goes to '(I Can't) Let Go'. It was my favorite during the DEBMS show in 2015 and I am happy that this beautiful, emotional song is available in a studio version at last. Even though it is the longest track on the album with its duration of more than 8 minutes, it does not get boring for a second. Both 'Matter Of Perspective' and 'Twin Stranger' have an unmistakable 80s vibe, which is not that strange when you know that James is a 80s kid who has a preference for the pop music of that decade (I know he is a big fan of Tears for Fears and Duran Duran). The latter track, which deals with doppelgangers, has a cool dynamic with respect to composition and lyrics. Another song with an intriguing text (partly in dialogue form) is 'The Patron God Of Embalmers', for which James has found inspiration in the ancient Egyptian religion and more specifically the symbolism regarding Anubis, the lord of the underworld.

The only tracks that do not appeal to me as much are the rather monotonous 'We Believe' and the instrumental 'Origins' (I am not too fond of instrumentals in general). But let it be clear: this album is really well-made and absolutely worth listening to. As it is not a classic dark electro record in the strict sense of the word, I am curious to see how it will be received by the old-school electro crowd. But being a member of the so-called European dark electro family myself (it is a small but fanatic club), I do not think that James needs to worry.

Whoever is interested can purchase the album on Bandcamp (digital version) or contact Martin Sane of Fïx8:Sëd8, who is in charge of the physical distribution in Europe.