Your gig at Dwaalspoor will be the first one outside of Norway. I can imagine it’s a great honour they asked you? Will it be the kick off for further world domination, by which I mean if you already got other offers to play abroad?

It definitely is a great honour! Coincidentally, we were on our flight back from Germany, impressed by the Berlin Atonal festival we had just attended and discussing possible live shows, when the request regarding Dwaalspoor ticked in. Dwaalspoor will be a next step for us geographically as well as our very first performance with vocals and percussion.

Not only for me, but for most of the Dwaalspoor will the concert be the first acquaintance with your music. How would you describe Dødsmaskin to someone that has never heard of you? Could you tell us something abouth the project’s history/members?

In terms of categorization, we have usually referred to Dødsmaskin as a noise-oriented drone project. Reviewers, labels and listeners tend to label the music as death industrial, however, and they are probably right. Whatever you want to call it: Dødsmaskin is bleak, noisy, heavy and brutal, but there is also structure, ambience, pace and dynamism that add a certain discipline to the turmoil. Industrial in general has long been a key part of both of our musical backgrounds, and you could say that Dødsmaskin is a distillation of the more sound design-related aspects of that aesthetical world. 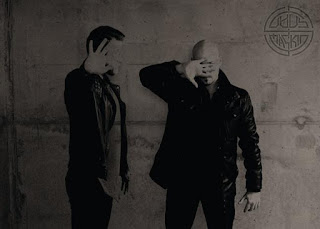 What can we expect of Dødsmaskin live?

We will build on material from all three albums and extend it into an «outer shell» of sonic texture, so to speak, and make it a really physical experience.

In the 90s Norway was the place to be for satanic black metal, with protagonists as Burzum, Mayhem and Darkthrone and we all know the stories of burning churches. A lot of acts in the noise/industrial genre have a background in the general extreme music scene (p.e MZ412, Kreuzweg Ost), does this also goes up for Dødsmaskin??

Yes, we have previously been involved in different black/death metal and industrial metal acts, and we enjoy listening to both old and new sounds representing those genres.

In a quite short time, Dodsmaskin already released 3 albums, for well known labels such as Cyclic Law and Malignant Records. That’s quite impressive!
Not only the short time in which you released those albums, but also that those labels decided to pick up your music, must be very encouraging for a new band?

Oh, yes! We have been very fortunate, but we also work tirelessly to make Dødsmaskin as good as we possibly can. No compromises – ever.

You play the Dwaalspoor gig together with Coph Nia. In my opinion an absolute highlight from Scandinavia. Are you familiar with his music, and in general with the Cold Meat Industry acts that made Sweden in the 90’s dark ambient country n°1?

In a sense, Coph Nia and several other names associated with Cold Meat Industry in the 90s collectively served as a gateway to the world of «unconventional» dark music for us. It is therefore pretty surreal to have collaborated with Nordvargr on the Malignant Records compilation track «Djevelhorer», and now to share the stage with another CMI legend.

A lot of acts in the noise, industrial and dark ambient genre have a strongly profiled philosophy behind their project. Judging by your name I would say your main theme is ‘death’ in general, or do I have to see the Dødsmaskin philosophy larger than that?

To answer this question, it is tempting to cite the preamble on our debut Ingenting as it more or less sums up the nihilist crux of our work:

«When contemplating a human face through the eyes of an x-ray machine, the void it projects back can be unsettling. This cranial frame, stripped of life; a reminder of the finite frontiers that constrain our transitory institutions, and the nothingness that precedes and succeeds them. However, while we occupy this bodily state, nothingness is detached neither from comprehension nor experience. Rather, it is interacting; mirrored in the human inclination to manifest its imprint time and time again through a continuous spiral of intellectual and material destruction. And its catalyst is also a testament to its paradox: the human impulse to escape it by any means necessary.» 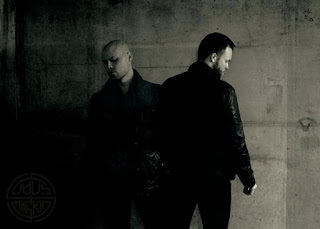 In my opinion, in the genre you operate, live visuals add a lot of value at concerts. Do you use them, and talking about movies: which titles would suit your sounds well?

We certainly have ideas about live visuals (and visuals in general) and intend to realize them at some point, but for now we are focusing on developing the audible part of our rig.

Suitable movies… Good question. Depends a little on the album, but on the whole:

Finally: I will dj at the Dwaalspoor afterparty, do you have a request?

Speaking of Norwegian acts, what about «Neon Sun» off Radiowaves by Seigmen and «Existence» off Thorns by Thorns?