-First of all: what a surprise you’re going to play the Dwaalspoor festival! I thought you would never perform anymore, and that the (excellent!) gig at the Cold Meat Festival last year was a one-off.
How did Dwaalspoor managed to convince you to make an exception?

That's what I thought to. I had given up on playing live again but doing the CMI fest was a no brainer. It proved to be so much fun, and so appreciated that I was high for a week. Both from the performance and meeting the whole "family" again. It had been almost 10 years since we did this but this night was magical for so many reasons.

Ia of Arcana later set me up for a blind date with Brigitte about the Dwaalspoor gig. I was sceptical, but after some flirting she had reeled us in.

-Another question that came in mind is: how do you get to the Netherlands? I’ve heard the rumour that you are very affraid to fly but I thought that myth was maybe a little exorbitant. But Brigitte told me it’s a fact. 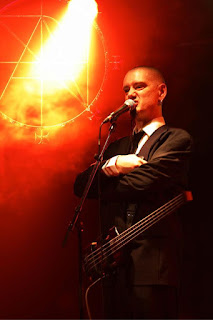 It's a fact, and it's more than just a fear. It's utter and sheer panic involved. Which is not a state I very much care to be in. Train is the only option for me and this is the problem with live shows for us. It's expensive as hell, and very tedious for long travels.

-Last year there was the Cold Meat Festival which celebrated the 30th birthday of this legendary Swedish label, although it ceased it’s activities in 2014. Besides Coph Nia, with acts like Brighter Death Now, MZ.412, In Slaughter Natives and Arcana (to name a few), still a label that speaks to everyone’s imagination. How do you look back on the heyday of this label?

These days, only with joy and thankfulness. There were dark times of course, with royalties gone down the drain. And then the whole meltdown. But at the end of the day that does not matter. CMI was much more than a mere label. It defied a whole genre and I am truly grateful to have been part of it.

-Recently, German label Raubbau brought out the digital versions of your albums, did you feel the need to take a step in the digital world, or was it on people’s demand?

There was no need. I just wanted my back catalogue to be out there. Let's face it, Spotify is the way most people listen to music nowadays. It beats listening on YouTube which is what you had to revert to earlier to stream my music.

-In the meantime, Ukrainian label Old Captain reissued also an expanded version of The Tree Of Life And Death, which housed 25 ritual tracks that were very different to your studio material, but also unmistakably sound like Coph Nia. All of this, plus the fact you will perform in the Netherlands later this year, looks like 2018 will be the year of Coph Nia?

The year of Coph Nia has passed. I figure we can do one show per year, and I just made the slot for WGT next year so we're fully booked:) WGT has been trying to book us for 4 years now I think. We played the festival 3 times back in the days and it's gonna be lots of fun doing it one more time around.

-(further on the past question) Maybe it’s a sort of justice, because in my opinion, your latest album Lashtal Lace (2015) didn’t get the attention it deserved.
I accidentally found it at a Raubbau stand, at a concert (Ordo Rosarius Equilibrio), and didn’t know you’ve released a new album!
It also turned out to be a very different album in comparison with your older work. In my review I called it Coph Nia’s most personal album, on which it seemed you found the love in your life.
How do you look back on this album, and how did people generally react on this quite different album?

This is a bit troublesome since it is where Coph Nia actually died midway through. The album took 3-4 years to finish. Kudos to Raubbau for not giving up! Lashtal Lace passed without much attention mainly because Coph Nia wasn't active. We didn't play live and I was not promoting it in any way.

-Also on Lashtal Lace, the title song is a beautiful duet with the late great Aleah (Julia Liane Stanbridge) who passed away a year after.
That song reminds me of a darker version of the Lee Hazlewood songs he did with singers like Nancy Sinatra, was this also what you had in mind, when you recorded this song?

I'm a huge Hazlewood fan, but Aleahs vocals came into fruition after the song was basically finished. But I love your reference! Let's say it is so and not tell anybody otherwise shall we? Sweet, sweet Aleah made this the most beautiful song I have ever made.

-I hear a lot of similarities between your voice and the deep voice of Milan Fras of Laibach. Laibach. Laibach did a lot of covers in their career, and Coph Nia also has with reworks of varied acts like Black Sabbath, Alice Cooper, Arthur Brown, The Rolling Stones, Front 242 and Buzzcocks’ singer Pete Shelley a nice catalogue of covers so far.
What’s the story behind these covers, is it because they fit on the album, or are those just songs you want to give the Coph Nia treatment just because it seems fun to do?

Yeah what is it with me and covers? I just love doing them. Most of them are songs that had struck a chord with me and I wanted to take that chord to a super chord. The only exception is Ozzys "Mr Crowley" which is a terribly cheesy song. But I had to do it sooner or later. Once they are done I don't even think of them as covers... they are now my songs and mine only. 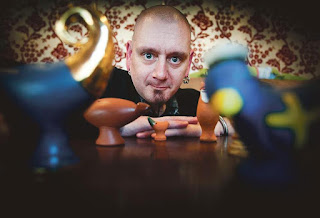 -Back to Dwaalspoor: I think there will be a lot of people who will see Coph Nia live for the first time. What can they expect: who will join you on stage, and will the song material be a mix of old and new one, or do you have some other plans for your show?

We do a standard repertoire. It's been so long that it will feel totally fresh. It's me and Linus as it always has been. For the CMI30 last year we did one rehearsal thinking that we had lost track after 8 years, but all songs are in our muscle memory. We do what we do best and we put on a good show, that's a fact. To many in this genre make dreary boring live appearances.

-Coph Nia’s work is highly influenced by Crowley magic and symbolism. Is this something that also defines your daily life? And if so, can you tell us something about how you experience this craft anno 2018?

It's always with me, but daily life is mainly work followed by rest. Sad to say so. Thelema, and the western magical tradition has always been a part of me since the mid 80s, but on a philosophical level.

-Are you working on new material, and if so, can you already reveal something about it?

Maybe I will get to making new music again, but it's problematic. I seem to have lost the creative spark. If it happens it will be a new direction completely. The logical step after Lashatal Lace would be a full on rock n roll album if you analyse how my music has evolved. I would have to break that and go for a more minimal gritty electronic sound.