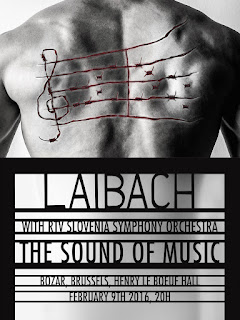 You might think that Laibach has become less subversive after 35 years, but that was not the impression we had in the build-up to this concert. Laibach was originally invited to celebrate the awarding of the title of European Green Capital to the Slovenian capital Ljubljana. The European Commission, however, protested against the invitation of Laibach and forbid the organizers to link the action to the awards ceremony.

Officially, they stated that ‘there would seem to be a significant risk that the irony which underpins their musical style may be misunderstood by an audience unfamiliar with the genre’, but there seem to be some people in the Commission who are really convinced of the ‘politically extremist character of the group’. It’s hard to define in what direction their extremism goes, but they might not have had the time to think too hard about that. (What a silly argument it is, moreover, not to program certain forms of art because it would be too complicated for the people. That is equivalent to wanting to keep people stupid.)

Nevertheless, this concert had much of a solemn celebration with numerous high official and speeches at the start. Those speeches were brief, luckily, and can be summarised as ‘Ljubljana is a beautiful and clean city’. That’s fine. The magnificent Henry Le Boeuf Hall - originally designed by Victor Horta as part of his plan to rebuild the entire district in Art Deco style (he got no further than the Bozar and Central Station) - and the presence of the RTV Slovenian Orchestra with choir strengthens the solemnity of the ceremony even more.

The show began with an avant-garde orchestral interpretation of Edvard Grieg's Olav Tryggvason, a composition that lasts no less than 25 minutes and was stunning. Atmospheric ambient pieces were mixed with beautiful orchestral arrangements and sheer noise. The deep voice of Milan Fras sounded like thunder from hell, while Mina Špiler sang heavenly. The avant-garde piano of Rok Lopatič worked beautifully, while Luka Jamnik added a good dose of chaos from his Korg and drummer Janez Gabric - in the quieter passages - played his cymbals with a bow.

The piece concluded with 'Ode to Joy' from Beethoven, which now serves as the European anthem. Perhaps this was intended to reassure European officials in the hall. Only to shake them wake afterwards with ‘Eurovision’. The phrase ‘Europe is falling apart!’ resounded loudly in the hall and might have reached even the highest level of the European Union.

‘Smrt za Smrt’ (death for death) is one of the early songs, and deals with torturing criminals to death. Mina Špiler - radiating elegance all evening - seems indeed to be tortured as she starts screaming. And although we initially thought that the room did not lend itself to video projections, chief ideologist Ivan Novak could project his images onto a translucent veil hanging between the band and the orchestra.

‘Bossanova’ is the another song from the last Laibach CD ‘Spectre’, a concept album in which many resistance movements in the world - both left and right - are dissected and distorted by the band. ‘Now You Will Pay’ was released in 2003 on ‘WAT’, a CD inspired by the cold war and the war on terror. This song deals with the refugee crisis, and again shows how prescient Laibach may be in his apocalyptic predictions. And how timeless the clichés about refugees are.

They'll come out of nowhere,
They'll enter your state,
The nation of losers,
The tribe full of hate
With knives in Their pockets
And bombs in Their hands,
They'll burn down your cities
And your Disney Lands

Barbarians are here (...)
Whatever you took from them
Now you will pay! 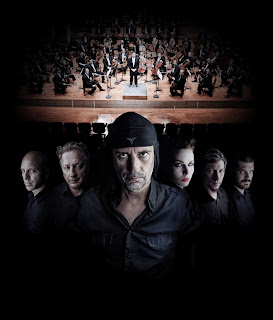 A voice out of nowhere says, ‘and now something completely different’. The starting sign for Laibach to commence their The Sound Of Music set. This musical is one of the few Western films that are allowed in North Korea, the country where Laibach gave two very mediatised performances this summer, and so Laibach chose to perform these songs there. With great results. The cover of ‘Edelweiss’ for example, is just as hilarious as the cover of Opus’ ‘Life is Life’ in the eighties. Morten Traavik - the Norwegian artist who brought Laibach to North Korea - also proved he can sing on ‘Climb Ev’ry Mountain’.

Pure kitsch, really, but Laibach knows to display a subversive twist by following their friend Slavoj Žižek - the Slovenian post-Marxist philosopher and political provocateur - in the suggestion that the main characters of the film actually are exemplary bourgeois Nazis being attacked by an abstract cosmopolitan conspiracy, represented by the Nazis in the movie. The images in the background display North Korean propaganda images interspersed with kitschy animations.

The band plays a few more songs from ‘Spectre’ and then leave the stage. The encores begin with the last Sound of Music song from the Laibach repertoire - ‘My Favorite Things’ - which is interpreted by Milan Fras again with a straight and serious face. An absent voice calls for the public to repeatedly saying ‘ho ho ho’ during several minutes, leading to general hilarity. And then comes the grand finale of the evening: a six-minute climax in which Opus’ number ‘Life is Life’, first in English (Opus Die) and later also in German (Leben heisst Leben).

Laibach got a standing ovation for it, and rightly so. After the show, we were able to see a few clips from the upcoming DVD ‘The Sound Of Music - Laibach: the Movie’. We were already familiar with the fragment in which comedian John Oliver was making fun of the shows, but the part in which a North Korean official explains why the subversive art of Laibach would threaten the socialist spirit of the DPRK and the group would therefore not be welcomed in the totalitarian state, should be seen by all those who claim that Laibach supports the dictatorship.

This truly was the best performance I've ever seen of Laibach. The fantastic show, the magnificent hall and overwhelming bombast of a performance with orchestra makes the memories of previous concerts fade away. The Centre for Equal Opportunities and Opposition to Racism has reportedly sent an observer and a police officer to the show to ensure that the Belgian anti-discrimination laws were not violated. I hope they enjoyed the concert as much as I did, and that they will report that it was a magnificent performance. Their work can sometimes be pleasant too, isn’t it?

Setlist: Olav Tryggvason (+ Ode to Joy) / Eurovision / Smrt Smrt Sat / Bossanova / Now You Will Pay / Do Re Mi / Edelweiss / The Sound Of Music / Climb Ev'ry Mountain / We Are Millions And Millions Are One / The Whistle Blowers / Resistance is Futile