An exclusively Italian bill, that’s what Fantastique.Night presented us Saturday. Somewhat surprising, since they usually make a point of programming at least one Belgian band in each edition. Not so today, but we cannot blame them. This bill is top indeed and the exclusive Italian atmosphere - there seems to be no end to the current stream of outstanding groups from that country - only makes it more attractive. 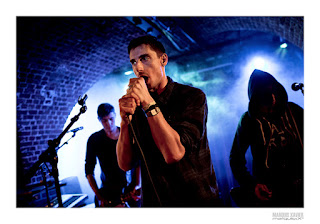 Star Control is the only group with a male singer this evening. But the charming female bass player also takes some vocal duties, as does the equally charming guitarist. They play post-punk, but surprise by starting with their slowest and most melancholic songs. Then, they slowly build up to the more up-tempo songs. They make use of all conventional tricks: a bass that produces deep sounds, and then starts playing the highest notes melodically; a guitar that travels back en forth between hectic and melodic; and a singer who sings in a rigid but passionate way, and whose posture at times reminds us of the late Ian Curtis. The evening started well. 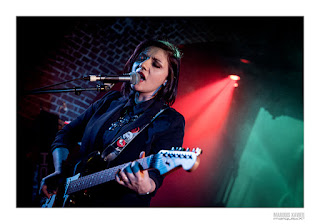 Winter Severity Index is the band that we had been looking forward to. The two ladies - accompanied by a bassist - have not stolen their name. From the first notes onwards, the temperature drops significantly. Winter finally breaks out, but only in this room in the basement of the Botanique. The guitar sounds as icy hail against the walls, while the synths bring up a dense fog. The voice of Simona Ferrucci bites to the bone, and it is heavy to trudge through the high piled snow on the rhythm of the drum machine. Sounds miserable? Well, I have deeply enjoyed it and I'm sure the large audience did just the same. 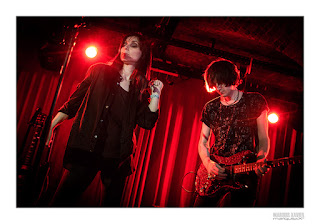 Schonwald does not really increase the temperature, but their music is compelling and catchy. The couple Luca and Alessandra - soon to be married - presents chilly but poppy wave in which the icy voice of Alessandra and the effect-overloaded guitar of Luca are central. They have already released three CDs, and with their last throw - Between Parallel Lights - they were almost canonized in certain circles. It also works live! The music alternates between the melodic and the monotonous. At times it sounds like melodic batcave, at others like dreamy shoegaze. I have more than once thought of My Bloody Valentine. But the result is always great. 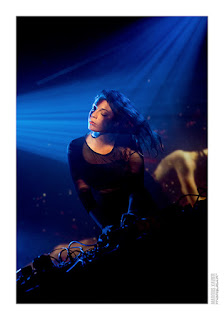 The official program may well be over, but there's an after-party. And exceptionally, there was another gig. Valentina Fanigliulo already played on the stage of the Fantastique.Night a few years ago with her project Mushy. That must have been a memorable performance, as the echoes that I received it put me to buy her CD. I immediately regretted that I had missed the concert.

Besides, Valentina, who at the time also played in Winter Severity Index, gave a demo of the group to the organizers. So Winter Severity Index were invited for this edition. It just seemed natural that Valentina would also play with her new project Phantom Love. Mushy plays melancholic wave with slowly passing soundscapes accompanied by angelic laments. Phantom Love does a more danceable thing without vocals. Valentina seemed in ecstasy as she sends her rhythmic concoctions in the audience, which by the way was just that hypnotized by the beautiful sounds that she offered.

This Italian theme night was a great success, even by Fantastique.Night standards. The next event will be coming soon, on April 16. This concert is the same as the edition  of November that was cancelled because of the high threat of terrorism. On the program: Molly Nilsson, Mary Ocher and Rodolphe Coster. Order your tickets quickly if you want to be there, because it was almost sold out in December.