I couldn’t have imagined that the Russian rock legend Boris Grebenshikov would ever play in Belgium, but he did last Friday. For years, I have been completely blown away by his music, and to date I have travelled abroad three times to see him at work. This time I could admire him close to home, in the Amuz in Antwerp, a beautiful baroque church where concerts and socio-cultural events are now taking place.

Since it's unlikely that you know Boris Grebenshikov, I’ll give you a little introduction. Grebenshikov founded the Russian rock band Aquarium in 1972. During the 70s, he lived the life of the underground hippies with his companions in Leningrad, now St. Petersburg. They played on the streets and in apartments and brought out cassettes with their own music now and then. 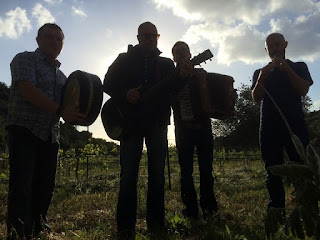 In 1980, they were allowed to perform at the ‘spring-rhythm’ festival in Tbilisi - now the capital of Georgia - that somehow felt like the official legalization of Rock in the Soviet Union. The performance of Aquarium caused a real riot and Grebenshikov was fired from his job and from the Komsomol Communist youth league when he returned to Leningrad. This was usually a career death kiss in the Soviet Union, but for Grebenshikov, it was the opportunity to devote himself entirely to music.

The circumstances were quite helpful. In 1980, Grebenshikov met Andrei Tropillo, who offered him the opportunity to record in his studio in Leningrad. The studio was meant for pioneers - the communist youth movement - but after his job, Tropillo let all alternative groups from Leningrad in to record and edit their cassettes. Aquarium accepted the offer with delight, and in the first half of the 80, a series of cassettes saw the light that would make their popularity grow gradually with the Russian music lovers.

Founded in 1981, the Leningrad Rock Club quickly became the epicentre of Russian rock. Aquarium has an important role in the club, with several members on the board. At the annual festival of the club - conceived as a competition - Aquarium almost always became the winner. In the second half of the 80s - during Perestroika - the group could even record on the official Soviet Record label Melodija, and they filled whole stadiums with their hymns.

But Grebenshikov wanted more. He believed he could become an American rock star. It was a flop and saw the death of the first incarnation of Aquarium. Grebenshikov returned to Russia and released the beautiful ‘Russian album’ under the name of BG Band. The success of this record convinces him to establish Aquarium again with new musicians, and the 90s were years of unrivalled success for Aquarium, with several impressive albums.

For Grebenshikov, the success became too obvious. He wanted to follow other paths, do more experimentation, to look for renewal. He dissolved Aquarium and made a solo album with The Band, the former backing band of Bob Dylan. Later, he founded the group again and he experimented with ambient, trip-hop, world music and so on. The more eclectic and experimental it was, the better.

And apparently, Grebenshikov lives through such a phase again. He has dissolved Aquarium this year for the second time and released an excellent solo CD. Earlier this year, he toured solo with a formation of nine men, including many members of Aquarium, and now he is touring with the ‘Russian-Irish Quartet’, in which he is surrounded by three Irish musicians.

The initiative comes from Brian Finnegan, an Irish flutist who has been working with Grebenshikov and Aquarium for years now. Finnegan got in contact with Aquarium in 2007. Grebenshikov than established Aquarium International as a complement to his group with musicians from Ireland (including Finnegan), India, Austria and other countries to a gang of 19 with sitar, strings, bagpipes, flute, Indian percussion... They played several times with this line-up, and I've been lucky enough to see them at work in Dublin, a concert that belongs to the very best that I have ever experienced. Grebenshikov said back then that the new album was going to be very experimental, and so it was.

On ‘White horse’ - the CD in question - we find a whole set of international guests, including Finnegan. The CD sounds like folk rock, but is especially experimental in the compositions and the song structures, that err as much as possible from the classical structures. After the disc, Finnegan was included in Aquarium as a consequence of his exceptional talents as a flutist. 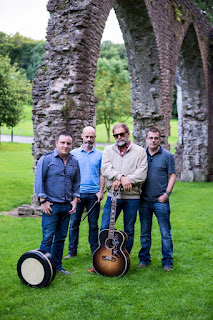 Finnegan came up with the proposal to accompany Grebenshikov with two other Irish musicians on a tour this year. Alan Kelly is considered an accordion virtuoso and performs on his own with the Alan Kelly Gang. John Joe Kelly is a master of the Irish bodhran and has already played with Finnegan in the folk group Flook. Moreover, he could be heard on ‘White Horse’. Grebenshikov leads the 'Russian-Irish Quartet' with his songs, guitar and vocals.

The first set revolves largely around 'white horse', a record of which Grebenshikov is - rightly - very proud. It started with ‘Sitting on a beautiful hill’, a song from ‘The Day of silver’, which according to Grebenshikov is the best Aquarium release of the 80s. Then starts a set in which half of ‘White Horse’ will be played.

There are a handful of exceptions. ‘I came to drink water’ comes from Grebenshikovs recent solo album ‘Salt’. And if you thought that a folk group could not play reggae, then ‘The words of the rastaman’ will prove you wrong. Aquarium, incidentally, was the first band to play reggae in Russian, in the early 80s. The first set is completed with three new, unknown songs. Then Grebenshikov says he urgently needs a beer, and the band leaves the stage.

When we look around while we are enjoying a pint, we see that we are almost the only Belgians. Not surprising, because when Grebenshikov plays in Western Europe, it is almost exclusively for the Russian diaspora. The name of the organization managing the concert - Top Russian Society - suggests what kind of people you can expect, as the price of the tickets was not small.

The second part begins with a flute solo of Finnegan, which then turns into ‘The words of the dove’, also from the recent ‘Salt’. We then go back in time. 'My Star' is undoubtedly the oldest song of the evening, as it dates back to the 70s and is still invariably played at every concert. ‘Plantan’ is an old hit from the 80s.

On 'Little Star' - a song from the ‘Russian period’ in the 90s - we see someone who is so moved by the extraordinary beauty of the song that she starts to cry. During the concert, we quite often observe people sharing hugs and exchange friendly and compassionate glances. It’s raining splendid songs that leave no one indifferent: ‘When the pain stops’, ‘Silver from my lord’...

A drinking song like ‘Glasses’ is on the list. ‘Put up the glasses. They say I cannot drink, but I do it anyway!’ The quiet closing song ‘on your own feet’ also refers to the Russian drinking culture, because it is a toast to the skill of returning home on your own after a night out.

Fortunately, some encores follow. ‘Tea’ is derived from the first official ‘Blue Album’ in 1981. The particularly poignant ‘Yoshiwara Flowers’ stood on ‘Psi’, a highly experimental album from 1999, when Aquarium was reborn for the second time. The band ends everything with ‘A day of joy’, a song from the period of the BG Band, but that was re-recorded a few years ago with the magical flute of Brian Finnegan. We are not the only ones to get high on the sound. Grebenshikov is strumming his guitar in ecstasy as Finnegan produces pure beauty with his flute.

What a beautiful ending for this extraordinary performance. Of course, the focus was put on the new work of Grebenshikov, but this man proves that at a higher age - he is 62 - you can still write wonderful music. He has never been driving on adrenaline and excitement only and was never ashamed to write sensitive songs. Many songs were relatively new, but there were - especially in the second part - also a lot of oldies. For me, the first part was fantastic and the second sublime. I hope we can see Boris Borisovich at work in Belgium again in the future.

Set 1: Sitting on a beautiful hill - The Lord is visible - Push - I came to drink water - The words of the Rasta man - white horse - Violets and ladybugs - Arigato - Indescribable - Tempora Mutandur (new number) - Dog Roller (new number) - Look into my eyes and tell me that it is your will (new number)

Set 2: The words of the Dove - My Star - Plantan - Little Star - Instrumental song - ?? - When the pain subsides - March of the sacred cows - Silver of the lord - Glass - on its own two feet

When the pain passes (live in Paris):

Flowers of Yoshiwara (live in Antwerp):

Day of joy (live in Paris):