Ahráyeph: I had known for a while that I was on the verge of burning out, but you always try to ignore it and keep going until it just stops one day.

With ‘AnimAElegy’ Ahráyeph delivered an excellent CD and perhaps thé Belgian gothic rock album. In the past there were often compared to The Fields of the Nephilim, but all the same elements of prog rock - Raf Ahráyeph likes to call it ‘prog goth’ - and black metal seep into the music. 'AnimAElegy' was a tough delivery, so we asked Raf for more explanation about this genesis.

Hello Raf. First and foremost, congratulations with your new album ‘AnimAElegy’. It's excellent. You've been working on it for a total of seven years, a biblical number. Are you satisfied with the result?

Hello Xavier. Thanks for the kind words. Yes, I'm definitely happy with the result. However, I have to put a nuance on those seven years : the songs were finished much earlier, but because there wasn't a recording budget available, and I didn't get offered a decent recording contract it has taken until now to release it. I've rejected three contracts because there were just pure extortion : in total, I would have had to pay up to three times more to have 'AnimAElegy' released on a label than I've invested on my own now, without even having one additional benefit.

We know you're very perfectionistic. Do you sometimes feel that your perfectionism slows down the creative process? 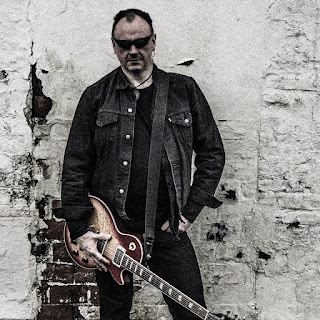 It certainly does. Perfectionism has its pros and cons. An advantage is that you'll work on something until the result is exactly what you have in mind and won't give up until that goal is achieved. One of the many disadvantages is that this way, you'll often burn yourself out and when you're working with others, you'll drive them into desperation. And when you lose yourself in all the possibilities that the writing and recording process offers, it strangely enough has a stifling effect because you don't know where to start first. It just short circuits my brain. Those are all factors I'm aware of by now, but channeling them into working more efficiently, is not something I've succeeded at yet. With others, I try to communicate as clear and as detailed as possible, but even that isn't always experienced as such, or even appreciated.

A lot of songs on ‘AnimAElegy’ have been out there for a few years. ‘Maiden By The Sea’ and ‘Resolve (A Dirge)’ were already released in 2009. Even of other songs - ‘Love / No Love’ - relatively older versions exist. Was it hard to marry songs together that were written over such a long time frame? How many songs on ‘AnimAElegy’ are really new?

Simply put : there are no really new songs on 'AnimAelegy', but that only applies to myself, because I've been living with these demos for so long before they were released on CD. A couple of songs didn't have lyrics yet, or different ones; others were only partially completed. That certainly applied to the extra songs, of which I felt they should be heard, even if they weren't part of the 'AnimAElegy' story. And since it has indeed been seven years since 'Marooned On Samsara', I felt it opportune to add those four: this way, you've got an entire listening session of one hour with the regular songs, and a nice EP added to the back of that. It was possible to put all of that on one disc, so why add a second one? That's just wasteful and bad for the environment.

You once said that the songs on ‘AnimAElegy’ are telling a story. Was this accomplished? And if it was, could we get the lowdown on the story behind 'AnimAElegy'? The album title - can we translate it as 'elegy of the psyche' - sounds rather intriguing. 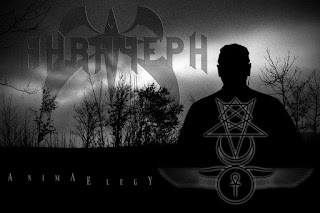 For obvious reasons, I don't want to give away too much about the story being told in those first ten songs. It's up to the listeners to experience that for themselves. Let's just say that it is a reflection on a time in my life that wasn't exactly the most fun and of which the recovery process is still ongoing. A couple of years ago, the day after the Pukkelpop disaster, as it happened, I spoke with Sophia's Robin Proper-Sheppard, who has become a good acquaintance of mine. He had just released his last album 'There Are No Goodbyes' and told me that in spite of the praise he received from fans and press, he really didn't want to go so deep anymore as he did because, like 'AnimAElegy', the album refers to a dark time in his life and in spite of all the artistic accolades this honest musical retelling of so much pain being heaped upon you, you just don't want to suffer too much for your art's sake either. I could and can understand him all too well.

Let's go back to 2008's ‘Marooned on Samsara’ for a second. You were regarded as a Belgian Fields of the Nephilim back then. In what way do you feel ‘AnimAElegy’ differs from its predecessor?

It certainly is a more mature album; not just song wise, but also technologically. The album's production is better and this improves the songs' qualities as such as well. On the other hand, it's hard to quantify that. You do what you do and try to surpass yourself and when you think you've succeeded in doing that, you hope fans and press will pick up on it. I of course wanted to rid myself of that 'Belgian Fields of the Nephilim' tag. Yes, they were an influence; suggesting otherwise would be quite dumb. But I've never consciously imitated them and even if such a tag makes it easier for people to typify my music, it also creates unrealistic expectations. Carl McCoy, I am not; I don't write about Nephilim or Sumerian gods, and the magical and mythical allusions, if at all present, are being used in an allegorical and metaphorical manner. When writing these songs, I've cast all the 'Rules To Writing Gothic Rock Songs' aside for the most part and concentrated on what I wanted them to become. The story I wanted to tell was much more important than singing with a voice from the grave or adhering to the trad goth cliché sound which seems to work for other bands. That's not why I do this : Ahrayeph is my personal outlet, not a heap of genre clichés. 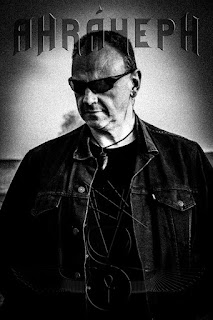 The release of ‘AnimAElegy’ was also slowed down by you having gone through a severe burn-out in the interim. How did this happen and how did you overcome that burn out?

One day, you wake up and find you are incapable of doing anything. And I mean nothing at all, not even communicating with others. You get out of bed to sit yourself down on the couch and stay there, completely burnt out, for the rest of the day until you can go to bed again. And so it goes, for years on end. I had known for a while that I was on the verge of burning out, but you always try to ignore it and keep going until, as I said, it just stops one day. Therapy has helped me to put myself in a better perspective, but the healing process isn't over yet. There are just too many issues that caused this burn out, and they all need to be put in their place and worked through before I can move on. But I've already been more active for a while now; I'm writing songs again - not for Ahrayeph, mind you, but for my metal project Trans World Tribe; I'm working as a vocal coach and I try to exercise regularly, because the cliché of a healthy mind in a healthy body isn't a cliché for nothing : it's true. But I still have ways to go.

You're still sitting on several songs you've never released. You once intended to release a cover album, you still have a lot of demos and you've admitted that only a few of the recorded songs were released on AnimAElegy... A few songs have been released via your Bandcamp page. What else are your plans with those songs?

I've recently decided to record and release two of those demos. They will also appear on the Bandcamp page between now and early next year. And that will be the last thing I'll do with Ahrayeph for a while. Concerning those covers : I've released a new, final version of my reworking of The Cure's 'A Forest'. It's not a remix; everything was re-recorded and got a new production. The rest of those covers are what they are and can also be found on Bandcamp. I have no intention of doing anything more with them. There's just one cover I'll be recording, which is, ironically, a Fields of the Nephilim song for a tribute album by the Finnish Gothic Rock Magazine. I'm not yet going to divulge which song I've chosen, but it won't be 'Blue Water', which we played at our first concert ever, and which was meant as a tip of the hat to Tony Pettitt, who headlined with NFD that night.

I understand that you've got a new metal project. Can you tell us more about it? 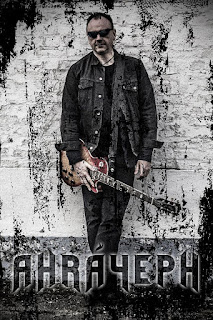 Trans World Tribe came to be through the mysterious ways of the Internet and social media. Through these channels I became friends with Brian and Staci Heaton, an American couple. Brian's a journalist and Staci works for the state of California. Hence, she has worked for Arnold Schwarzenegger when he was governor. But Staci also has a phenomenal voice. When I got out from under the worst of my burn out, I discovered that each time I picked up my guitar, metal riffs came pouring out. I still don't have to put in any concerted effort into doing that; they just flow out of me so spontaneously that I sometimes have too many ideas at once to record them all. And because it all came together so spontaneously and I didn't feel like singing or even playing everything myself, I initially asked Staci to sing. If I would be singing on those songs, it would again become too much of a genre cliché. Aside of Staci, other musicians will also take part in this project. Alex Martin, who also wrote a few drum parts for certain 'AnimAElegy' songs will be part of it, as well as several guitar and bass players. Staci's husband Brian would like to contribute some lyrics. But the core of Trans World Tribe is Staci and me. We already recorded a cover of Heart's song 'Alone', but it's not representative for the kind of metal I write, which is heavier, tighter and thrasier and contains more progressive elements. We only recorded that cover to see if we clicked. And we certainly do, because we tend to bring out new song ideas in each other constantly. We're currently writing demos, which we will record for a debut album sometime next year.

And what are Ahráyeph's future plans?

Nothing. I'm all 'goth'ed out' at the moment and am shelving Ahrayeph in favour of Trans World Tribe. I can't, at this time, say how long that will last. Perhaps I might start on new songs this time next year, maybe I'll never get around to it again, who's to say? I just can't say anything meaningful about that right now. I would have loved to promote 'AnimAElegy' live, but it's difficult to get the right personnel for that, or so I've experienced unfortunately. Maybe it'll happen eventually, but as long as it isn't, aside of those two finals songs and that Fields of the Nephilim cover, Ahrayeph will be on indefinite hiatus and my priority for at least the next two years will be Trans World Tribe.

Thank you for this interview!