Raf Ahrayeph is a perfectionist. Each detail has to be just right to him. And this in part explains why the wait for 2008's 'Marooned On Samsara' has been so long. It also explains - and this is the postive side - why this follow up - 'AnimAElegy'- is so good.
Important to know, is that Raf went through a severe crisis before 'AnimAElegy' could be made. The hardships in both the band and his personal life gave him a severe burn-out, which left him inactive for over a year. But aren't those often the circumstances in which the best records are conceived? How many great albums have been recorded by musicians who had to overcome massive problems?

Since 2001 - when he started the band - Raf Ahrayeph has had a lot of trouble to attract musicians. Perhaps this was in part due to his perfectionism, because it can't be easy having to work with someone who always strives for more and better. The consequence is that Raf recorded all instruments by himself, except for the drums and a few keyboard parts. He was able to realise his vision entirely, and this bears fruit. 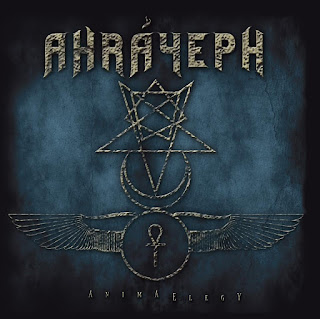 Ahrayeph plays gothic rock, and is very good at it. The Belgian exponents of the genre can be counted on one hand (we automatically think of Star Industry, and also Erato, who also are exuding signs of life again after a few crisis laden years). After his debut, Ahrayeph was often compared with Fields of the Nephilim. We understand this comparison rather irks Raf, but it does remain a nice reference and one that applies to Ahrayeph, even if you can't accuse him of being a copy of the masters. Raf's voice, for example, differs significantly from Carl McCoy's voice from the grave.

It is mainly in the slow and atmospheric parts - 'Maiden By The Sea', 'Thread'... - that this comparison holds up. When things get a bit faster, the comparison quickly dissipates, like on the reasonably sharp 'Love/No Love' or the compelling 'White Square II' (which happens to be a reworking of an old Crucifire song, Crucifire being Ahrayeph's predecessor). Listening to the extended guitar solos of closing song 'Finale', one can't help but think of Pink Floyd, and on bonus songs like 'Pressure' and 'Awake' - the CD offers no less than four bonus tracks - we could even detect some black metal influences, especially in the drumming. This is no surprise, given that Raf originally hailed from the black metal scene (he used to be a guitar player in Ancient Rites). Overall, the guitars are very melodic and the synths add tension and atmosphere. A combination that works perfectly with Raf's hoarse and deep voice.

'AnimAElegy' is an extension to 'Marooned On Samsara', but is simply even better. Recorded better, more balanced, more detailed, more melodic... Fans should get this superlative to 'Marooned', and others - especially when being fan of gothic rock - absolutely should get to know this Belgian exponent of the genre.
Xavier Kruth
Ahráyeph: website / facebook / bandcamp