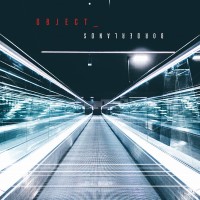 2019 has been a good year for the fans of old-school electro. A few months ago, I reviewed the new albums of Amnistia and Fïx8:Sëd8, 2 German artists that I cherish and that acquired a well-deserved spot on the Bimfest bill (Amnistia last year; Fïx8:Sëd8 this year). Perhaps a little less known is Object, a dark electro project that also originates from Germany. Then again, it has been 7 years since Andreas Malik released truly new work. In fact, it looked like he had buried Object for good. But as the insiders know too well, artists in this genre often change their minds. In most cases, they also decide to perform again. Object could recently be seen at the Lauscher vs Oldschool festival in Erfurt and it is there where I bought the new album 'Borderlands' even before the official release date.

Even though the new album is strictly speaking the amalgamation of 2 of Andy’s projects (that is, Object and Borderlands), it bears the typical Object signature. With other words: raw and complex sound tapestries, interwoven with samples and Andy’s heavily distorted, mostly unintelligible vocals. Compared with the tracks of other dark electro artists, those of Object are less clearly defined in general. You can perceive the Object albums as one protracted composition, which is divided into several pieces with certain variations. This has the consequence that they are usually not easy to memorise. 'Borderlands' is not different in this respect.

The previous album 'Mechanisms Of Faith', which is considered a masterpiece in its genre by many and which also received a very high rating from me, contains a few tracks that really stand out (in particular, 'Neural Explosions', 'State Of Reality' and my personal favourite, 'Under Zero Halo'). 'Borderlands' is in my opinion less refined, "heavier" and somewhat less digestible as a result. It is absolutely a nice and enjoyable album, but it cannot equal the (top) level of 'Mechanisms Of Faith'. There are 2 songs that I think are memorable: the title track 'Borderlands' and 'Beyond Belief (Vocaliz-ed)'. Honourable mentions go to 'Heaven Sent Salvation' and 'Nitrogen Skies'. The latter is a more classic dark electro track with guest vocals of Martin Sane (Fïx8:Sëd8). As usual, there are also a couple of purely instrumental compositions on this album ('Parhelion Descend' and 'Vortex Of Entropy'). All in all, it is a relatively short record with a playing time of just over 50 minutes. And this time, there are no remixes nor other bonus tracks to be found.

Dark electro in general and Object in particular is music that is especially fit for the cold winter months. 'Borderlands' is no exception in this respect. I have not reviewed many releases this year, but I am sure that I am not the only rivethead who thinks this is one of the best albums of 2019. Highly recommended!