Goethes Erben: Strangely enough, those who cry the loudest are not those who drown during their flight

In 2014, Goethes Erben broke the silence in which it had been hidden since 2006, when the theatrical avant-garde formation went on hold for an indefinite period of time. They did performances and produced a music theater, but with 'Am Abgrund' there is now the first studio album in 12 years. ‘Silent for too long’, is one of the songs on the record. It is not so much about the long break. It is about politics, about the lack of humanity, about the failures of society and about the answers we offer to it. We talked with mastermind Oswald Henke ... 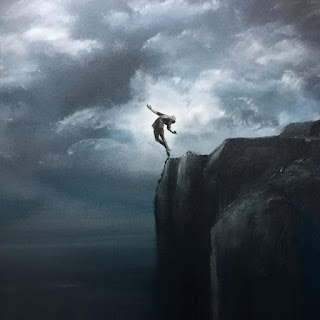 ‘Am Abgrund’ is the first studio album since Goethes Erben returned in 2014. A few years ago, you said it was too dangerous to release physical records today. Why did you decide to make a new CD anyway?
I did not say that it was dangerous, but that it makes little sense as the market for physical records is de facto dying. We have released the live version of ‘Rückkehr ins Niemandsland’ for the 25th anniversary of Goethes Erben on DVD and the live recording of ‘Menschenstille’ on DVD and CD. Moreover, Goethes Erben does not exist in a purely virtual way, only in the form of mp3-downloads or streaming services, because I think that this intangible consumption of music hardly matches with appreciation for the music or the artist. Particularly with streaming, there is also the danger that censorship occurs somewhere or somehow, because if you do not own something, access to it can easily be denied. If you have a physical record, you know that you can listen to your music independently, whenever you want, without being connected to volatile data readers or an internet connection.

I also find tangibility important. Holding an LP in your hands, feeling the cover and reading the notes, that makes it valuable. For example, I am someone who knows perfectly well where that particular album is that I listened to at the time of my first big love, or where the first CD I bought decades ago lies. Unfortunately, nowadays, music is often only understood as an acoustic screensaver.

Why we release a new album now? Simply because we have something to say. We do not have to comply with a contract. We made the album because we wanted to and had the deepest need to share our opinion and our thoughts. That is why we released ‘Am Abgrund’ on both CD and LP.


In 2015 you directed 'Menschenstille', a very dark music theater based on the collection of poems 'Narbenverse' that you wrote after the suicide of a friend. What did you want to express with this piece?
I wanted to try to understand the theme of suicide, and this from different angles. For me personally, I wanted to understand why a person voluntarily opts for death even when, for example, he is not sick to death, which I would consider as a clear reason for wanting to end your life. The theme is actually very complex and there is no generally valid answer. Ultimately, one thing is certain for me: ‘life is the option on everything, if you want to.’ (‘Leben ist die Option auf Alles, wenn man will.') That's what it's all about. The theme is simply too individualized to judge or answer in a general context. It depends on how much one values ​​life and of what it means to someone when life becomes too heavy and therefore seems worthless. For me, suicide is something that falls under personal responsibility, but I think that every person should also consider how personal actions affect the lives of others. What does it mean for the survivors, the family, the partner and the friends? 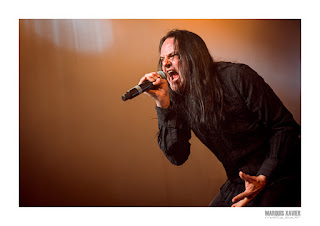 I feel that mental disorders and depression are also very present on ‘Am Abgrund’. Is ‘Am Abgrund’ thematically related to ‘Menschenstille’? What is the overarching theme of ‘Am Abgrund’?
‘Am Abgrund’ is not really connected to ‘Menschenstille’, but in the end everything I make is connected in one way or another, because I fundamentally write about my feelings and my view on the issues that disturb me in social or political terms. In my view, art has a conscience function in our society. Art can point at things and make you think, but it can offer no solutions. ‘Am Abgrund’ has an introverted side - ‘Es ist still’, ‘Denn es ist immer so’ - but also very extraverted, angry pieces such as ‘Darwins Jünger’ or ‘Lazarus’, and then pieces that connect both: ‘Zu lang geschwiegen’ or ‘Verstümmelung’. Thematically, however, this collection has nothing to do with ‘Menschenstille’. ‘Am Abgrund’ is not a music theater piece but a collection of fragments. ‘Menschenstille’ was a live staging, ‘Am Abgrund’ is a classic studio album. Maybe those introverted songs are the ones that connect many fans to the trilogy (the first three albums of Goethes Erben, xk), though ‘Das Ende’ is also angry, albeit in a different way as ‘Darwin's Jünger’.

Ultimately, depression is a disease where you no longer escape from without help. ‘Am Abgrund’, on the other hand, deals with emotional worlds that can be influenced and changed. It is very dark and melancholic, but you still have your own actions. The speechlessness we experience is rather social and political. We live in a world that is becoming smaller again. People speak about post-truth. Politicians deliberately lie and contradict fixed facts. That is the problem. The world is approaching depression, but we humans have the ability not to accept that and change it for us. Of course, as an individual you cannot change the world in one day, but you can start with it and contribute small things.


When the single ‘Lazarus’ was released, you announced a music theater titled ‘Meinungsstörung’. Did ‘Am Abgrund’ arise on the basis of this idea? Will there be a new music theater?
‘Meinungsstörung’ is a music theater piece and part of the music from this piece was released on ‘Am Abgrund’ in studio recordings, so basically out of context. ‘Lazarus’, ‘Darwins Jünger’ or ‘Verstümmelung’ are scenes from this piece. But since music theater is difficult to finance, which I have unfortunately found out again with ‘Menschenstille’, I will not be performing this new piece for the time being. The financial risk is too big for me. So, in 2019, ‘Meinungsstörung’ will first appear as a book. Will I bring it as a music theater? Vielleicht, irgendwann, irgendwo ... (Probably, sometime, somewhere...) 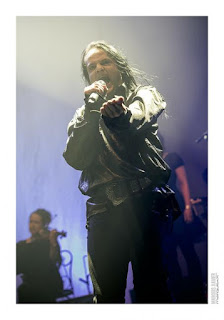 ‘Lazarus’ is about the reaction to the refugee crisis, ‘Darwins Jünger’ about the selection of people in strong and weak, ‘Rot’ about child abuse ... ‘Am Abgrund’ is clearly very political. Do you see a connection between the ‘failure of humanity’ that you are singing about and the increase in depressions?
‘Rot’ is not about child abuse, but about abuse and manipulation in general. Every person is influenced and deformed in the course of his life by all who surround him. It does not matter if it is your own family, friends, acquaintances, media, politicians, et cetera. Everything works on our opinions in one way or another. Our opinions are disturbed in this way. ‘Meinungsstörung’ deals with these different aspects of influencing opinions, but also about the individual who tries to live, survives or perishes in these mechanisms ...

The world is depressed, but strangely enough those who cry the loudest are not those who drown during their flight, the ones who are shot or tortured in their homeland or who simply starve because they were born in a region that was not or is not privileged.


‘We have all become old’, you sing in ‘Denn es ist immer so’. Of course, the goth culture has changed and it has aged since you were one of the leading bands in the Neue Deutsche Todeskunst. Can gothic still attract young people? What do you think about the aging of the goth scene?
The problem is that I do not listen to what many of the current bands in the goth scene make. You often have the feeling that ‘consumption-gothic’ is being released here. Clichés are more important than content, it is an end in itself. They do not put anything from themselves in it. Basically, the scene is also watered down, because there are hardly any people, especially young people, who really live the scene, who do not only wear black as a mask and ‘dress up’ during the weekend. Being black is a living condition. It certainly has something to do with the appearance, but also with a feeling of life, something that does not meet the standards and expectations of society and of compliant fellow citizens. Ultimately, my black-dyed hair, my way of life and what I release are a protest against what disturbs me in the world. It is my way to say no, I do not belong to you. I stay on the sidelines and I observe you, colorful people, but also those who only dress in black because it is chic or because they want to provoke. 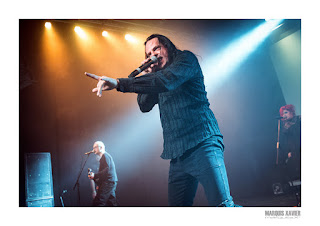 Only provoking is too little for me. After all, I want to achieve something with my life, even if it is only that I can reach people with my lyrics and music who feel understood and do not feel alone for a moment. I am often sad about how our society deteriorates, forgets the achievements of enlightenment or rapes and burns them with post-truth. Humanity is becoming increasingly brutal, both in communication and in the ability to empathize with another. That is not a problem of young or old, that is a problem of the people themselves. I like thinking people, people who can form their own opinions, who are open-minded, who can feel and who are not ashamed to show their tears at a performance by Goethes Erben, because they were ready for it. Age does not play a role. I think that Goethes Erben is probably too old to attract young people, though it cannot be ruled out. What I make is an offer. Either you want to involve yourself with my lyrics and music, or you just let it be. Ignorance also existed in this scene 25 years ago. I do not believe that it is bad if you cannot do anything with Goethes Erben. There are also many things that I cannot do anything with.

The Neue Deutsche Todeskunst was a movement that united very different bands. Was there actually a common denominator in the movement, and would you agree that the main groups have evolved since 1994 and left the genre?
'Neue Deutsche todeskunst' was a term invented by the music press. I always thought it was very one-sided, because we have never only cared about death, but with the whole human being and his different emotional worlds, albeit rather with the dark feelings and with a realistic pessimism touch rather than euphoric. 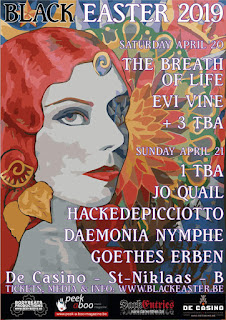 In 1993, the three largest projects from the Neue Deutsche Todeskunst - Goethes Erben, Lacrimosa and Das Ich - worked together on ‘Lycia’ by Christian Dörge. Several participants, including you, were dissatisfied afterwards. What has gone wrong?
The songs themselves were good. Only the final mix in the studio, where I was not present at the end, did not turn out as I had imagined. It was just no teamwork. That was the tragedy.

In April 2019 Goethes Erben will perform again at the Black Easter Festival in Belgium. What can we expect?
As always at festivals, we play through the different chapters of the history of Goethes Erben.