Our Love Can Destroy This Whole Fucking World 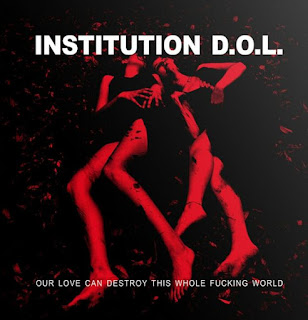 Our Love Can Destroy This Whole Fucking World, an impressive slogan that’s been Institution D.O.L.’s motto for a while.

Or, how a positive emotion is able to set up a rather drastic negative reaction.

Somehow with pride Institution D.O.L. describes itself as being the only active power electronics act from Austria. Barbie B. and Meta Dolor announced the release of Our Love... (which we will call OLCDTWFW from now on) a long time before with the announcement that this would be the “cacophonic magnum opus” of the project.

Our expectations were being sharpened a bit more by also mentioning that OLCDTWFW is the most violent and harshest, but also the most passionated release in the already 22 years history of Insitution D.O.L.

Barbie shouts out also a warning: this album is not for so-called noise tourists. A clear source of annoyance, these people who are not involved in this kind of music for the right reasons (and disappear as quick as they came, recognizable in many subcultures).

But people who look further than just the shock effect, a constant factor in this genre, and those who wish to receive your daily portion of noise in a way that is equal to an uppercut as hard as possible: OLCDTWFW is definitely one of those records that you will keep up with in 2019.

Recorded in three different countries over the period of 3 years, the 7 songs evoke a world in which terms such as punishment, total devastation and irreversible obliteration are omnipresent.

OCLDTWFW does not focus on the aspect of love we find in the title, so it seems. They look at the world that these noise lovers have transformed into a post apocalyptic landscape, instead.

Within all this lies the power of this album: especially by telling a coherent story and atmosphere that were created with handmade analog sounds, an authentic high dose of aggression and by removing the word “mercy” from their dictionary.

So forget the term “soundscape” for now, because “deathscape” is in this case more appropriate.

It’s not the gates of the temple that are cracking when opener ‘Invocation’ invites us for the liturgical ceremony. Barbie, in the imaginary form of an organist, amplifies his instrument with a good dose of distortion. Which made us believe that even Our Lord Jesus Christ had already given up his hopes on this Church.

A song like ‘Invocation’ maybe isn’t the most original way to start an album, but we find it quite effective in creating a certain atmosphere.

‘We Are The Black Ones’ and ‘You Are All Lost’ are like the sermons of thunders that are poured out over the “warriors of love” their heads, straight from the lectern.

Love is a theme that occupies a prominent place in religion, just as much as dogma does. So swallow it all down to the bottom and please, don’t ask any questions! Therefore, it’s no coincidence that religion is a recurring theme for many acts that operate in this genre.

You better arm yourself well for this battle, because ‘Abschlachtung’ hasn’t stolen its name. Maybe that’s why ‘You Are All Lost’ temporized a bit, because the awaiting battlefield isn’t rosy at all.

‘Abschlachtung’ takes a firm hold, but is still quite mild compared to the complete chaos of ‘Absolute Hell’, that has to say without German slogans, but where the death grunts don’t lie.

Frivolities that would appear in the past are completely out of question at OLCDTWFW. You can point the nod to angstpop/misantropop (I love this term) in songs like ‘You Are All Lost’ and ‘In Dust And Death’, which keep the knife (only) half a millimeter off the troat.

After about 30 minutes, when we arrive at the closing title number, the regret of it all seems to be hidden in the tail.

Embedded with spacy soundscapes and piano we hear a voice that shows true emotions for the first time. As if one wanted to indicate here that the irreversible reaction of their love has ultimately done more harm than good, and only now has it come to the full realization of this. Sometimes you don’t have to be deafeningly loud to make your statement. Saint Valentine is imminent, and now that we’re talking about statements: if you’re still looking for a present, your lover will be very satisfied just because of the title on its own.

But let’s return to the religious beginning of the record. We briefly thought about Apostle Peter wailing bitter tears after he had betrayed Jesus. Love played also here a significant role, for Peter was seen by Him as His rock.

Institution D.O.L. shows itself with this 9th record also as a true rock in the power electronics movement. Highly recommended for fans of acts like Propergol, Genocide Organ and The Grey Wolves.