La Scaltra: Our lyrics are written by life. They tell about pain, grief, farewell, but also about hope.

Fans of gothic rock, your attention please! If you haven’t heard of La Scaltra yet, then you have to listen to them urgently. The band has already released two fine albums and will play at the 25th Dark Entries Night at the Kinky Star in Ghent. 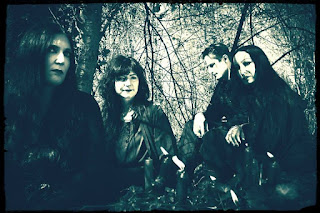 La Scaltra started out as a duo of Aeleth Kaven and Dae Widow. How did you meet and how did you decide to make music together?

Dae and I met 2014 at a concert. Dae was doing merchandise for aeon sable and we learned to know each other there. We soon found out that we are very similar and that we share a love for music, so we spoke about how it would be to do a project together. That´s when the idea was born.

Solar Lodge, one of the leading labels in the gothic rock genre, releases your CDs. How did you get signed with Solar Lodge?

Since Dae knows Artaud and Jawa Seth from The Merciful Nuns well, they paid close attention to La Scaltra and we got the chance with our ‘Ghosts EP’ to join Solar Lodge in 2016 after we published ‘Cabaret’, our first CD without any label. Therefore we are still very thankful for this opportunity given to us and happy to be part of Solar Lodge. 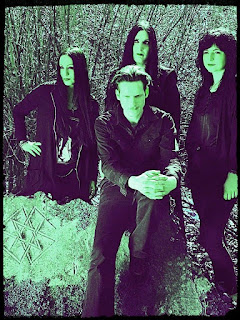 The music you make can be characterized as gothic rock, but the focus is more on synths than on guitars. Isn’t gothic rock meant to be dominated by guitars?

I guess that's because we have those elements of gothic rock in our music, but it is not essential. ‘Cabaret’ and also ‘Freakshow’ were dark medleys of what came to my mind. It was very experimental, with different dark styles and sometimes not really definable. All in all it is witchy and gloomy, and that´s what will always be in our songs, whether there is more gothic rock with guitars in them or more synths and wave or mostly all combined and mixed.

You started out and you build your image as two girls making music. I remember an interview I did with Bettina Köster is which she said it was very important for her to work with women, as they have another feeling for rhythm. How important is it that the music is played by women?

Hmm, I cannot say it is different. If you have a real musician in your band, it does not matter whether it's a woman or a man. You can have boisterous girls as well as you have feminine boys in your group... in my opinion, it is the spirit of music that matters and how it all works together in the end, not the gender.

Where do you find inspiration for your lyrics?

First and foremost: Life and its experiences. What could be more instructive und informative as our lives? And what is more destructive than life? Everything we went through, whether good our bad, forms our further person, our further paths. It becomes part of us and often it is not easy to accept. This struggling with life is one part of creating my songs, on the other hand of course being a hardcore fan of Horrorfilms and -games, so I guess there will be a creepy story or a link with a genre game on every album of La Scaltra. 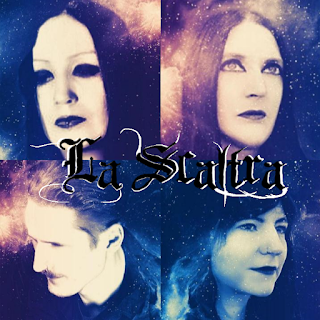 In 2016, you released ‘Cabaret’ as a digital album, but also the ‘Ghosts’-ep consisting of 4 songs from ‘Cabaret’ on Solar Lodge. Why two different releases?

Yeah, that's right. We were a little bit too early with 'Cabaret', haha. The Solar Lodge deal was a few months later, so they did a lift from the album and created the 'Ghost EP' with a special booklet and 4 songs.

2017 saw the release of your second full album ‘Freak Show’. It got very good reactions. Are you happy with the record and the reactions?

Of course we are! Every inch of happiness about something you created with your time and heart makes you proud, or should make you proud. But I would never take it for granted! It is sometimes still like ‘What? Do they really mean us?’ When it comes to compliments... sometimes all of this is far, far away and sometimes it is right next to you and looks you in the eyes and goes like ‘bam, in your face!’

‘Freakshow’ saw the participation of Jay Sharpe as producer and guitarist. I believe he is now a full member of the band. What is his role in the band?

Jay Sharpe is a full member of La Scaltra and is also the guitarist and Din-Tah Aeon of aeon sable. He is my beloved life mate and boyfriend and a high valued partner. All of those song ideas - which I prepare all by myself - are being finished, mixed and mastered by him. And of course he creates all guitar lines, except I have ideas before he can speak out loud, haha.

You recently added another member to play bass: Saeda Moreau. Was she included in order to perform live? 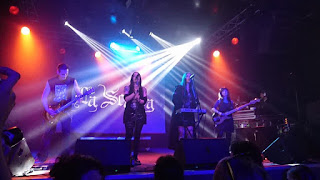 Saeda Moreau is a full member of La Scaltra, not just a live performer. Before she came to La Scaltra, I did bass and vocals, but I feel better as a standalone singer. More movement, more interactions... bass playing needs an own position in our music. Our songs are mostly built on our vocals, and it is extremely hard to do dancing, playing bass and singing altogether with such bunch of vocal parts. I am happy Saeda is with us to completely fulfil those bass lines and she does a great work, way better than I did. Now I can dance, sing along and concentrate on those parts (and nudge the others on stage, haha!)

Will the growth of the band from two to four members affect the music you make?
Of course our bass lines will be more intensive, I guess. In our new songs the bass lines are “more” than on the albums before, that much I can tell. But I hope you will listen yourself then. 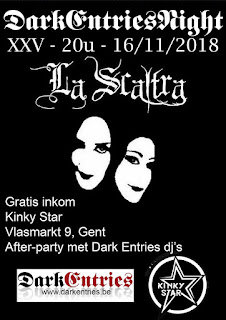 You did several concerts during the last months including the Amphi Festival. How would you describe the La Scaltra live experience?

La Scaltra live is a dark journey into memories that are both beautiful and ugly. Our lyrics are written by life. They tell about pain, grief, farewell, but also about hope. Seeing La Scaltra live should be a sea of feelings combined with a little bit of Rock Music and Dark Wave Synth to dance along. Yeah, dancing with the witches! And we are really looking forward to playing in Belgium. Finally!

I heard you are working on a new album. Can you already tell us something about it?

I can tell this much: There will be the same gloomy atmosphere, but with more power, more magick, more expression and passion. La Scaltra continues to evolve and we will show that on the next album. We will also do collaborations with male singers again, but yet I cannot tell you who it will be. Time will tell…