In 2013, Lizard Smile released the beautiful 'State of Void', a mini-CD that meant a great leap forward for the band. They were always good, but it was clear that the quality of the recordings had improved considerably by working together with Eric Van Wonterghem (Monolith, Sonar ...). 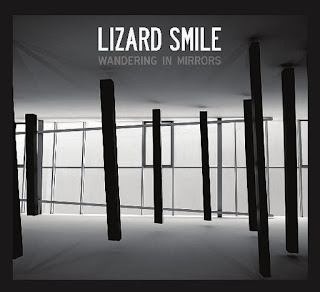 The extraordinary quality of 'State of Void' made us mouth watering for more. Now that we are almost dehydrated - five years later - a successor finally comes: 'Wandering in Mirrors'. Why does it have to take that long? That is just the way it is with Lizard Smile. They have released only four CDs in 23 years, but then there’s not a single bad one among them.
'Wandering in Mirrors' opens a new chapter. Not that it is very different from the previous chapters. Lizard Smile remains faithful to their recipe to mix classical gothic rock - think of The Sisters of Mercy and The Fields of the Nephilim - with danceable electronics. That recipe works, the previous records and the excellent live reputation of the band are proof of that.
Yet I notice an evolution in 'Wandering in Mirrors'. I feel that the band is more involved in sound experiments, that they dare to make more atmospheric pieces. That also explains why the songs are a bit longer. Other bands would not so easily get away with it, but Lizard Smile knows how to do it and it doesn’t get boring for a second.
What I do not understand is that the most extensive atmospheric song - with the significant title 'Noise Fades Out' - is only available as a digital bonus. The song is good enough to be on the CD and there was still some space over with only six tracks. Although it is no secret that the band would like to release ‘Wandering in Mirrors’ on vinyl also, and then the space is obviously tighter.
Let’s go for a tight record, then. 'Wandering in Mirrors' does not have any weak moments with its six songs, and that is the most important criterion for assessing a record. Whoever liked the past CDs will also like this one, and for those who get to know Lizard Smile with this new one also, 'Wandering in Mirrors' is an exceptionally strong album.