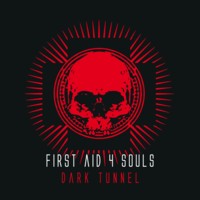 Yesterday, I published my "best of" list on Dark Entries. This contained a giant spoiler, as one of the Chosen Five was a release that I still needed to review. Of course, I could have waited a little longer, but that is not who I am. Here is my review of 'Dark Tunnel', the new album of First Aid 4 Souls, which made it to my favourite dark electronic releases of 2017 last-minute.

I cannot repeat it enough. This Hungarian project remains one of the best kept secrets within the dark electronic scene. I have all CDs of First Aid 4 Souls and there is literally not a single bad one. The style varies from album to album, with some releases being more experimental and/or darker than other ones. The previous album 'Trashcathedral' was the first CD on which the collaboration with guest-vocalists was limited to a single person, namely Mortum (in the meantime, I have found out that his real name is Gyorgy). He is once again present on 'Dark Tunnel', making me wonder if he has become an official band member. Either way, you will not hear me complain, as Mortum's voice perfectly fits the dark(er) tracks of First Aid 4 Souls. And rest assured that the new album is dark.

'Dark Tunnel' is a relatively short album, especially in comparison with previous releases. The total running time is less than 45 minutes, covering no more than 9 tracks. The emphasis is on old-school electro/EBM; therefore the album is in the same vein as its predecessor. But it is remarkably more quiet, even demure in a certain way. Exceptions are 'Her Face As An Angel' and 'A Place To Rest', which are up-tempo and cheerful to some extent. Even though "cheerful" may not be the right word for a song which is about a funeral (just to be clear, I am talking about 'A Place To Rest'). Fact is that almost the entire album is dedicated to death and decay. An excellent theme, especially with Mortum behind the microphone. I am a big fan of his morbid sounding vocals and lyrics, which have been partly altered by effects. Even though I have to rely on the CD booklet to check what he is actually singing about.

A couple of tracks which I would like to mention in particular. 'Back To Dust' is a lovely, atmospheric track with a menacing undertone in the beginning. The subsequent, equally melodic 'Sleeping In Death' is even better. The multi-layered vocals/effects give this track a wonderful, almost moving touch. 'Dead Life To The Sons Of Men' is the most unusual track on this album because of its tribal feel. It is not the first time that First Aid 4 Souls is experimenting with this kind of influences, but on 'Dark Tunnel', it feels a bit out of place. In 'Nothing Keeps My Mind Clean', Mortum delivers yet another really nice vocal contribution. Finally, 'Inside There Is No God' is an authentic dark electro song. Dark and menacing, reminiscent of the 90s.

Compared to 'Trashcathedral', 'Dark Tunnel' is slightly less good, but then again, 'Trashcathedral' featured 2 of the very best dark electro tracks of 2016. But let it be clear that 'Dark Tunnel' has rightfully earned its place in my top 5 of 2017. First Aid 4 Souls never gets old, on the contrary, it only gets better.