Sygo Cries: Our music is irrelevant in a relevant way

Sygo Cries is back! We heard shouts of joy from people who know the band, because this coldwave duo - which in a sense was the source of the highly successful This Morn’ Omina - had a cult reputation in the 90's. We are honored that Sygo Cries wants to play on our special Dark Entries Night to celebrate 20 years of Kinky Star on April 16 and so we had a chat with Mr. Stain and Mika Goedrijk. 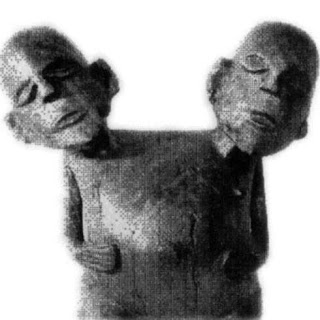 Hi Mika and Stain. You've just released a new mini-CD with your own material. What was the reason to write new songs with Sygo Cries?
That was quite spontaneous. In twenty years in which we worked separately, we have gathered more than enough inspiration to write new songs on themes that seem to us still close to our heart.
Sygo Cries arose in 1992. What are your origins and what do we need to know about the beginning of your project?
We were already both very fanatically involved in music, after several personnel changes in several band incarnations, we became aware  that we were the biggest fanatics and so we have developed Sygo Cries.
Why has Sygo Cries remained silent for so long?
Stain: I think we woredk very closely together, and after a long time we both wanted to try other things. That is what we have done. Mika has been very successful with This Morn'Omina and I have been unsuccessful in many other areas.
Mika: it is not too bad though Stain - head on!
At the time, three demo cassettes were issued. I remember an old interview with a promise make the old releases available online. Is that promise still valid?
Yes and no. We didn’t have the production and recording possibilities we have now in our 'Revol(t)' studios. So for us it is somehow ok to refresh those old recordings and throw them online, but given the positive reception of our new material, this might not be the best time to do this. Everything is possible, so to speak.
You describe your music as ‘tongue-in-cheek, intimistic Cold Wave and electronic music from Belgium’. What makes you more tongue-in-cheek than other cold wave groups?
What's in a name? Welche Schuplade ist wichtig? Our music is irrelevant in a relevant way. The fact that we realize that provides some urgency to our music. That urgency can be labeled ‘tongue-in-cheek’, but is also something that makes the music sound better to the listener in person.

Mika, does it feel strange to return to a group that has never really broken through after the success of This Morn 'Omina?
Sygo Cries may never have broken through, but that's not what I consider less successful. After so much time we get more attention and have more performances than back then. "Good things come to Those Who Wait" is clearly applicable here.
I just can’t help it. Cries Sygo is another way to express myself. It doesn’t feel strange at all. Everything fits together.
You have opted for a non-image. No images of musicians are made or distributed. What is the philosophy behind this?
Good question. It is virtually impossible to have a non-image. For a non-image is an image too, right? You may choose not to paint a room, but it still has a color. Is it a neutral choice to opt for neutrality?

Anyway, we try to make our music as autotelic as possible. We wonder what masochistic disaster tourist would like to see pictures of us...
What will the future hold for Sygo Cries?

A vinyl release is in the works. We are still looking for the longest title ever.
And there will of course be some nice performances, beginning with 20 years of Kinky Star in Ghent, Lille, GDW-fest and Liege. Be there people!


Sunday April 16: Sygo Cries at 20 years Kinky Star in Ghent, along with Curtis and Black Snow In Summer