It's actually surprising how long The Arch are already active. They were formed in 1986. Thus, they are now celebrating their 30th anniversary. That deserves something special, and this new ‘Fates’ album is just perfect as a birthday gift.

The perseverance of the group - 30 years is a very respectable age - and songs like ‘Babsi ist Tod’ - the most famous song of a band so often comes from their very first release - and ‘Ribdancer’ - released in the successful decade change of 80s to 90s - have put them on the map. Not only in Belgium, for The Arch plays throughout Europe and is very popular in for instance Spain and Germany.

Although the sound of The Arch has obviously evolved during these 30 years, there is a clear common thread in their music: the combination of danceable beats and harsch guitars. They are not the only group using this combination, but they certainly have a very recognizable style. 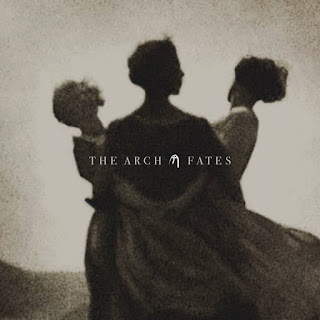 The Arch obviously have tried to broaden their sound in recent years. That was certainly the case on predecessor ‘Engine in Void’ and to a lesser extent to the more danceable ‘Beating The balance’ EP. ‘Fates’ is it just the superlative of the efforts to do so.

Opener ‘Lady Gasoline’ is quite poppy and could even be played on commercial radio, though I have realistic expectations about the prospects in this respect. ‘Robot Sapiens’ should directly appeal to your dance muscles. The title track combines industrial rhythms with melodic guitars, while ‘Spear of Destiny’ may well appeal to the goth rockers. It goes without saying that the lyrics are full of literary and historical references. Ronny Moorings sings on ‘Monsters & I’, and it should not come as a surprise that Clan of Xymox lures behind the corner here.

The second half of the disc is more experimental. The rhythm slows down on ‘Immerzu’, a ballad in ¾ sung in German. ‘One By One’ sounds nothing like The Arch with its bluesy rock, but ‘Brain Duck’ somehow restores the classical sound. ‘Empty Garden’ sounds like an atmospheric dance number, while ‘Deaf and Blind’ does sound a little psychedelic. ‘Frozen Jungle’ does what a closing song should. It is a slow and claustrophobic song with several voices and an extraordinary build-up, breathtakingly beautiful.

I think I can say that ‘Fates’ is the most varied The Arch record in history. That does not come at the expense of quality, rest assured. Rather on the contrary. It is actually their best record ever.