25 years WGT. That's quite a while, and I hope this will continue for many more years. It is also a time when we can look back. For this jubilee, there are various exhibitions that focus on the history of the festival and the Gruft scene in East Germany. The main exhibition is undoubtedly the ‘Leipzig in Schwarz’ historical review in the Stadtgeschichtliger Museum.

The WGT arose in 1992, or more precisely even in 1993 when the original ‘Moonchild Festival’ was renamed the ‘Wave Gothic Treffen’. But there was a whole history even before these dates. In the second half of the 80s, the ‘Gruftis’ - the German word for tomb people - also surfaced in the communist GDR. The Gruftis were often viewed negatively, and the Stasi - the East German secret service - kept a sharp eye on them. 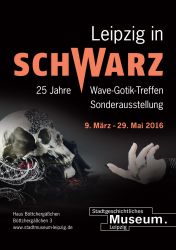 More or less legal events were organized everywhere. CDs and cassettes were smuggled out of Hungary or from the West and then copied endlessly. There also was an underground circuit in which local music circulated on cassettes.

Michael Brunner played a central role in the Leipzig scene. This mystique young man went to take a course in Potsdam, where he also met kindred souls. He took the initiative to celebrate Walpurgis Night at the ruins of the castle Belvedere in Potsdam, and invited his friends from Leipzig to come over. The turnout was unexpectedly high: 150 participants from all over the GDR, with even some West Berliners among them. Most of them were arrested by the police, unfortunately, but for a minority, the party on the Pfingstberg got along.

It was not only police and state who were hostile. Skinheads often attacked the passive Gruftis too. In August 1990 - the wall had fallen by then - there was mass violence against Cure fans who wanted to see their idols at work in Leipzig. Extreme right-wing groups were scattered among the road from the Leipzig station to the arena where the concert took place, and attacked the concertgoers.

However, it was not all hostility. At that time there were many links between Grufties and punks. Punks often got along well with metalheads, but the latter often looked down on the soft Gruftis. All have had a common enemy, though: the Stino or Stinknormaler (stinking normal people). These bonds between subcultures, however, would disappear along with the GDR.

Michael Brunner was also the man who, in 1991 - the GDR was now absorbed by the Bundesrepublik - founded the organization ‘Moonchild’ along with his friend Sandro Standhaft, and began to give parties at the Villa. The Villa was of course too small for the larger plan of the two men: organizing a Moonchild festival. They had to move to the Eiskeller at Connewitz Kreuz for that end. That soon proved too small too, because the capacity of 800 men was nothing compared to 2000 people who came to attend (mainly through word-of-mouth). For those who could not enter, there was also a street party outside with bonfires and drinks. 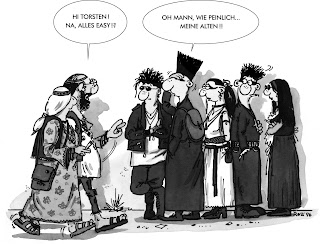 That may have been the impetus for the second edition - in 1993 - to be renamed a Treffen (a meeting in German). The nostalgia for GDR times - when togetherness was more important than the commercial aspect or the program - plays a part in this. The location moved a few hundred meters to Werk II and even more goths attended. And so the anticipated criticism resounded that there was indeed more programme and commerce, and less contact between the participants.

Goths like to complain, which is known, but despite all the criticism, the festival grew year after year. For the third festival, a new organization was formed: Sol et Luna, led by Brunner. Standhaft was removed and for many years pulled out of the city as the festival took place. The name of the festival was changed to ‘Wave-Gotik-Treffen’ as a counterweight to the ubiquity of English in the scene. It was also the first time that there were multiple venues.

In 1998, the number of visitors totalled 12,000 ghosts, and in 1999 20,000. The festival was bursting at the seams. The organizers aimed too high in 2000. They invited no less than 349 groups, where there were only 112 the year before. As a result, the festival could not pay the fees of the groups. The organizers didn’t get along and the coordination was flawed. A lot of gigs had to be cancelled. On Sunday, the security personnel stopped working and suppliers started breaking down the stages.

A number of people took the initiative to save what could be saved. Bands played for free and offered their material. There was even a gothic security service. The police also helped, if only to avoid greater chaos. However, that did not appear to be necessary as the public remained unbelievably calm. This can only happen at gothic festivals. (Is there anyone who has not made the comparison with the Belgian Eurorock festival last year?) 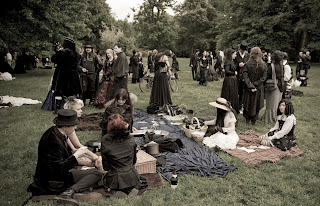 There’s more that puts this ‘Chaos-WGT’ in a bad light. Since a few years, there are complaints that the festival gives space to right-wing extremist ideas and bands. For example, the right-wing magazine Sigill gets a yearly stand at the gothic market. In 2000, Von Thronstahl is invited to play. Singer Josef Klumb - whose ringt-wing publisher Verlag + Agentur Werner Symanek also receives an annual stand on the market - is known as a supporter of anti-Semitic conspiracy theories and gets a prohibition to perform by the city council. The group then performs without singer, but with masked men waving flags. On the flags: an image of the black sun, an occult symbol that was part of the SS castle in Wewelsburg. (WGT got criticism again in 2009, when an image of the black sun was printed on the camping tickets of the festival.)

Anyway, the festival is bankrupt in 2000. The organization is taken over by Move GmbH in 2001. They restore financial order, although this inevitably involves criticism that it has become too commercial and that the festival lost its alternative spirit. The program is even more diverse and now includes events at the opera and exhibitions in museums. With sales of 3 to 4 million annually, the importance for the municipality cannot be underestimated. It is no surpise, then, that the festival got awarded with the Leipzig Tourism Prize in 2014.

The jubilee edition of the WGT also offers some smaller exhibitions. In the station of Leipzig - the biggest in Europe - an exhibition gives some basic information about 25 years of WGT, but especially displays beautiful photographs by different photographers. One of them is Gerd Lehmann, the man who released the ‘Gestus-Moon Calendar’ between 2007 to 1997. He is entitled to a separate exhibition at Haus Leipzig.

Lehmann was a famous fashion photographer in the GDR, but stopped in 2007, after a career of more than 40 years. Not only because he had a beautiful and long career. He was also reluctant to adapt to the requirements of digital photography. However, he still likes to exhibit his work in a scene where he has always felt at home. The Grassi Museum - finally -  offers an exhibition titled ‘Faces of the Wave-Gotik-Treffen’ with pictures of Marcus Rietzsch, a man who makes beautifully staged photographs of festival goers and issues them since 10 years in the yearly book Pfingstgeflüster.

There is a second important historical exhibition, this time about the time before the WGT. It is no coincidence that after the ‘Wende’ - the fall of the Wall and the reunification of Germany - a big festival was founded in Leipzig. After all, a great Grufti-scene appeared in the GDR in the second half of the 80s. 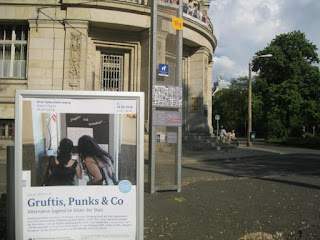 There is an exhibition at the Runde Ecke, the former headquarters of the Stasi in Leipzig, with the focus on how the Stasi monitored alternative youngsters. The exhibition has changed considerably since I visited it for the first time in 2012. Where the earlier focus has been on the Gruftis, there is now more attention for other types of ‘negative-decadent’ groups: Tramper (hippies), Punks, Skinheads, Heavy's, New Romantics and Popper.

The Stasi - the espionage service in the GDR - could count on a broad network of ‘Informelle Mitarbeiter’, people who reported regularly about suspicious events and friends. In the goth scene, the number of spies was even larger than in the total population, as we learn from a lecture by John H. Nicholls, a man who writes a PhD on the whole issue. Where in the population an average 1 in 50 cooperated with the Stasi, it amounted to 1 in 6 in the scene.

There are several factors why the Stasi could count on so many people. On the one hand, they could get access to Western goods and alcohol, on the other hand there were also people who participated by conviction, because they believed they could help building a socialist state in this way. This could lead to the contradictory situation where people who were very important and dedicated in the scene also went to report to the Stasi. On the other hand, cooperation with the Stasi could always be rejected without serious consequences for the person concerned.

The exhibition shows numerous reports of interrogations of Gruftis. It is striking that these usually give a very honest story. There are reports of night trips to cemeteries. This usually happened after a night out. There’s even a picture of a grave that has been desecrated with a graffiti of ‘Boy George’.

However, the information from the Stasi was not always correct. Thus, in a report, Gruftis were seen as listeners of psychedelic music (which then is defined as ‘dark, depressive music’). Even funnier is the remark that ‘Codix’ - yes, that’s how it’s written in the text - are an extreme form of Gruftis who are coming from the metal scene and like vampires and The Cure. You can recognise the ‘Satansgruftis’ by their red belt and shoelaces. They sleep in tombstones and destroy cemeteries. If you see a Grufti with his legs crossed, then you can bet he’s a supporter of Lucifer, because only they exhibit this kind of behaviour. 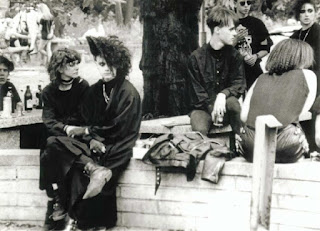 The Stasi also mentions more positive things, but even they are not always correct: Gruftis believe in an afterlife, feel connected to the church but are hostile towards the leadership of the churches, they want to help people in need and are characterized by a passive attitude. Because of this passive attitude, they are a favourite target for the much more violent skinheads.

We still don’t know when the Gruftis exactly appeared in the GDR. A document speaks of 1987. Another document states that The Cure got a lot of attention in the West German media in 1985 and '86, which certainly had an impact on the youth in the GDR. The already mentioned John Nicholls told us that the funding for the surveillance of ‘negative decadent youths’ diminished after the ‘Punk-Problem’ was declared to be solved by the Stasi in 1983, but that the budget was increased again in the years 1985 to 1987. Someone asks whether the first Gruftis might have arrived in the vacuum that the repression against punks in 1983 had left, or only at the rise of the second wave punk from 1985. If someone has an answer, please let us know.

The exhibitions offered a lot of information for those who want to study the history of the WGT and the Grufti-scene. The scene his far from dead, as the annual turnout at the festival shows. It has since stabilized around 20,000 to 25,000 participants every year. I hope this will last many more years, because knowing the history is one thing, but writing history is even more fun.

Read Part I:  If only it could always be winter and always night... 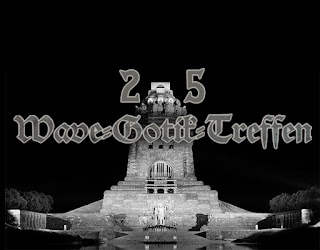