Waveteef: We don’t want to repeat the past, we want to discover and dance until the light comes!

Waveteef is holding its third festival this far, and it will be a feast  for all those who love new wave and minimal synth. You will not only be able to watch established bands like The Frozen Autumn and Parade Ground, but you can also make lots of discoveries. We asked organizer Matt Black to show us the way in the programm.

Hi Mat. You organize the third edition of Waveteef on 8 and 9 April, a unique festival that brings together the best of minimal wave. Are you happy with the reputation Wave Bitch has acquired? 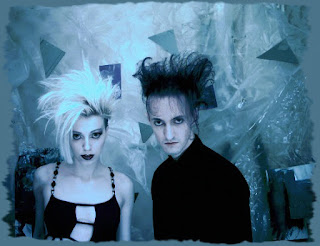 We frankly doubted whether a concept as Waveteef would work in Belgium. Not that we have never really cared because we are always organizing events. One is more successful than the other. We have the impression that it Waveteef gradually could capture some hearts and that is what good music should do, right?

How do you explain the great interest shown for a few years for the minimal wave revival? Would you say that this genre is able to attract a younger audience to wave events?

I guess labels like Minimal Wave, Dark Entries, Medical Rec, kerncrash, Fabrika ... have played a very important role. They issued very strong releases, both reissues as recent works. Minimal wave is absolutely able to attract a "new" public, even if there are less accessible works in this style. But the scene can certainly use some new blood, why not ?!

You also founded your own record label: Die Blind Records. You released the excellent debut of Luminance on vinyl. Are there any publications in the pipeline? 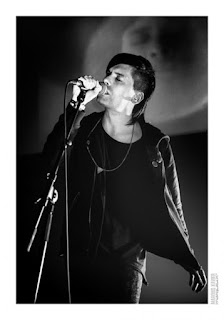 Luminance was the second release on Die Blind Records. Before, we did the reissue of Deathly Quiet! Our third release will come in May, a reissue of the almost untraceable synth-punk / wave pearl: X-Quadrat, originally released in 1982. After much insistence, I got permission from the band! We are very enthusiastic, anyway.

Do you mind to give us some information about the various groups that will play on Waveteef? The two openers of Friday - Orchidée Noire and Alles – are still unknown to us ...

Orchidée is a very recent discovery, even for myself. I got the tip from the organizer of 'Darker Side' in Ghent and I was immediately convinced. I believe I invited them on the same day to come and play at our festival. It is a French band with nostalgic, melancholic synths and floating component.

Alles is a Polish band. I bought their first album at Wool E-Shop in Ghent and found their sound quite unique. They have a raw sound, some songs have something hypnotic. Some tracks will simply blow you away with analogue synths and fat drum machines, while other songs will just make you move. And Polish sounds so simply dirty, haha. 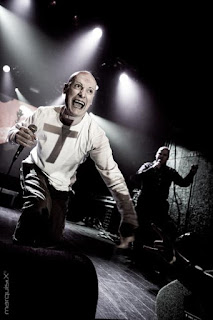 Ash Code is wellknown. They have already played in Brussels and are now seen at all festivals. Another one of those groups that impressed the public with just one disc, and they have recently released a second one.

Ash code just has a very strong sound. I think they are so successful because they have a true total picture. They are a very strong live band and they are well attuned to one another. About the sound, I can say little more than that they have found a formula for success! They are a crowd favorite.

For the main act on the first day, you went to an older group. Parade Ground has been around since the 80's as one of the Belgian great bands in the electro and synthpop area. Is that a way to reconcile old and new on the bill?

Definitely, older bands will always have a place in our festival. And the band Parade Ground is simply a winner. They have been absolute pioneers and in my opinion, they are underrepresented in dj-set lists. I was in all states when they agreed to play at our festival. I never saw them live but with the films I saw on YouTube, I can only wait with enthusiasm.


On the second day. You invited Dear Deer. To my knowledge, they already played in Brussels. Adam Usi is an illustrious unknown for us. Can you tell us a bit about both projects?

Dear Deer is a French project, it is a successful mix of Death Rock & Minimal Wave. Claudine Dear Deer might also be known to you under the alias of ‘Cheshire cat (the bouncing)’.

Adam Usi is a one man project from Germany with origins in Israel. He is just releasing his debut at Young & Cold Records (also known from the eponymous festival). This is minimal wave, but with a very accessible, almost pop voice. A bold mix but with a good results. 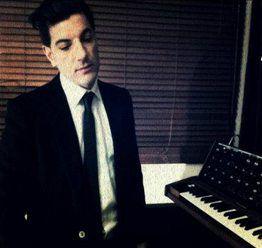 Greece has also an interesting stance in the minimal wave scene, and will perhaps surprise us even more in the future. We have already had Selofan, and now we have Doric, which is actually a follow-up project of Human Puppets. How did you get them to perform?

You already mentioned it. I have been a fan of what Human Puppets and following all they were doing, so I was soon aware of Stathis’ new project Doric. That man knows just what he's doing, he knows perfectly how to work his synths and what sounds he wants to squeeze out of it. I saw him on Kalabalik last year in Sweden and then decided that he would have to be present at Waveteef 2016. We got lucky!

The absolute highlight is undoubtedly Frozen Autumn from Italy. They are really a cult, and perhaps they are also the biggest attraction for this edition of Wave Bitch, isn’t it? 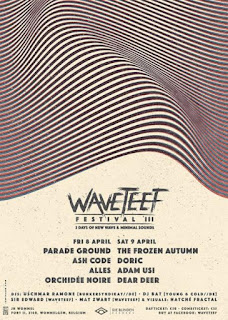 The Frozen Autumn need little introduction, they are now worth more than their reputation. They play insanely gorgeous sets live, and they look nice too. We are eagerly looking forward to it!

So, recapitulate shortly why we should come to Waveteef?

Waveteef offers a wide range of bands that circulate in the synth environment, old friends and new projects that are worthwhile to explore, but we also offer after-parties where you will hear songs that you have never heard before but which are incredible and will fill the dance floor for sure. The venue fits perfectly with the atmosphere we want to create. We don’t want to repeat the past, we want to discover and dance until the light comes! For real Wave Teefjes stay until the end!
Waveteef Festival III