HEDERA HELIX: It is only in a live performance that all the elements which make up Hedera helix are present.

Hedera Helix exists for 14 years now. They are currently finalizing the their new en second album 'Pastiche', the successor to the excellent 'Dolce' from 2003. There are also two gigs in the pipeline, on which you will be hearing the new work. The first is a special set for Coalescaremonium on April 2; the second is the official CD launch in Zulte on May 7. Oscar Valerius Kandinsky Hedera Helix is ​​known as a great erudite, and so we asked him some arduous questions. 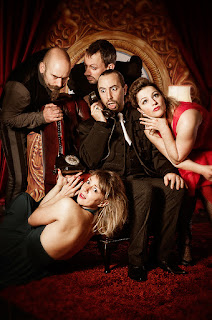 Hedera Helix is more known as ‘ivy’ among the people, an evergreen, woody vine from the Ivy Family (Araliaceae). What is the actuality surrounding this highly popular plant?

It is a project that has been around for over fourteen years. Filling a gap in the contemporary performing arts? Hedera helix is ​​a musical mix between electro and industrial pop. Lyrically sharp and visually eccentric, with physical theater. Sometimes danceable, sometimes intimate and intense. We are six, a collective. A 'corrective' if you will.

Research shows that plants grow faster under the influence of music. But it is therefore a good idea to play music for your ivy?

The machinery is working well this time. The new CD is almost ready. Eric Van Wonterghem is busy mastering and the design for the packaging of ‘Pastiche’ is worked out also. Only Sabam (Belgian copyright agency, xk) has yet to provide proof of ‘non-intervention’ before pressing. It is really Kafkaesque, because we manage our rights ourselves. 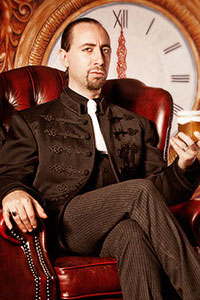 At a mourning tribute or the Hungarian star footballer Ferenc Puskás in Madrid in 2006, Laura Benítez played a piece on cello. How did you feel about it?

You should come and see us especially at Coalescaremonium for the art nouveau set. Or on May 7 for the CD launch. For those who like the CD as a tangible music bearer in their collection: it will cost eight euros on the show instead of ten. Mild equivoque: ‘by the same token, you will pay more’…

Dr. Edgar Berillon argued that, at the time of Louis XIV, travellers already knew when they had crossed the border of Germany by the enormity of the excrement. In his book ‘How can we ever get along with a people that stinks’ in 1915, he furiously criticized the Germans and their excrements. What do you think? Can we get along with the Germans?

God ‘success’ ... I prefer ‘respect’. A CD issue is not really important to us; even the music itself is not everything. It is only in a live performance that all the elements which make up Hedera helix are present. We took thirteen years to record thirteen songs. Time was a problem, I admit. We are all busy with many different things. Life is too short to learn only one trick, right? 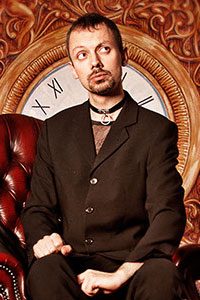 Did you notice that ‘asthma’ and ‘isthmi’ are the only English six letter words that begin and end with a vowel separated by only consonants?

The choice of Dutch in our lyrics has to do with a certain degree of maturation. We have long passed the Hollywood imitation phase. But I have to admit that an exotic touch is not strange to me. On ‘Pastiche’, you will find one song in Spanish and one in French, and we also throw some Italian, Portuguese and Russian phrases in the lyrics.

The Doelist movement opposed the power of mayors in and around Amsterdam in the 18th century. They obtained the restoration of the guilds in their ancient rights and the ban on street trading. However, the mayor election in 1752 was a great defeat for them. What has gone wrong?

The visual aspect makes a concert complete. A green cabbage tastes best stewed with bacon, and the whole is more than the sum of its parts. It’s all part of the project. We are now six on stage. It began with three persons musically and three for visuals and dance, but that was an absurd separation, since Elixir has no challenge splaying the piano and percussion is not a challenge for Buttercup either. It will therefore be very varied, both musically and visually. 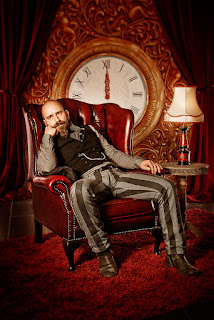 Recent scientific research has shown that pigeons can recognize cancer cells on biopsy images. Do you agree with the use of birds for this purpose?

Last year, at the entrance of Coalescaremonium, sat a graceful lady who kindly asked us 40 euros. They put a plastic strap around our wrist and then we could simply stride in. Astounding. Contacts with Coalescaremonium have taken place two years ago and a part of the organization came to see us at a small festival in Berlare. The fact that they worked so hard to make everything fit made it go smoothly. And there’s also the location: the venue is theatrical and therefore it blends perfectly with what we do.

A gigantic cloud of alcohol was detected at a distance of about 6,500 light years from Earth, in a region where stars form from clouds of gas and dust. How long do you think it will take before we can exploit that cloud? 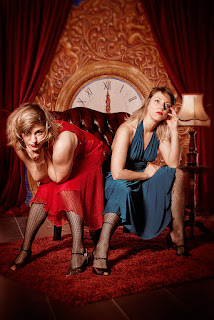 The set on Coalescaremonium is fully adapted to the theme, the location and the public, with a special French-language cover. For the CD launch, we want to focus more on our work. We can not ask family and friends who might be afraid of goths to pay 35 euros to go to Coalescaremonium. It’s better to invite them in Zulte.

What are your plans for the future?

Thanks for your generous insights.

May your beans be plentiful.

Official CD issue Pastiche on May 7