Hekate: I have the firm conviction that we can learn from myths and legends for our own lives and for our development.

Hekate will soon be playing in Belgium, at the Black Easter festival. Since I have followed this band and their most interesting work for a long time, it seemed like a good opportunity to interview the group. To make something special out of it, I've proposed to singer and percussionist Axel Menz to give an overview of the career of the group on the basis of their discography.

Hekate was born in 1993. In the early years, you worked a lot with Chorea Minor. The music consisted mainly of electronics and percussion. You have made two releases together: ‘Sanctuary’ in 1993 and ‘The Seventh Sign’ in 1995. After that, the group fell apart. What happened in those early years?

Our first years were very exciting. We were all children from the 80 who evolved from the darkwave of the 80s to the emerging goth scene. There was a small club in our hometown Koblenz. Alongside hits from usual groups like The Cure, Joy Division and Depeche Mode, the DJ also played very obscure things. Here, we learned about the music of Current 93, Death In June, Coil, Delerium and Dead Can Dance. That was a revelation to us. We were not musicians, but the idea was born to also do something in that style. I bought old military kettle drums at an antique market and our keyboardist bought the legendary K2000 synthesizer, used for example by Douglas P. on his ‘But what ends when the symbol used shatters’ LP. 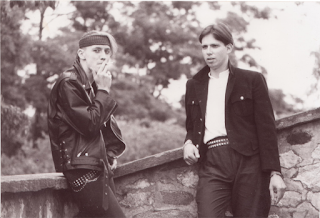 Mario called himself Chorea Minor and told me that he could never be a part of Hekate, as he wanted to devote himself more to ambient music in the future. We started with the 'Sacnctuary' tape and played in several art exhibitions, including for A.R. Penck, who noticed us. Unfortunately, all that’s left from the experimental phase are some records on tape. Chorea Minor then came up with the idea of ​​treating the Christian faith. Thus ‘The Seventh Sign’ was born, the first Hecate and Chorea Minor split CD. That topic led me to a rejection of the dogmatic christian faith and eventually to the end of the collaboration. I already knew Achim and Susi. Susi was our singer already on ‘The Seventh Sign’. Achim came in after the production of the CD, and it became a hitherto continual bond of friendship and trust. We also have a friendly relationship with Chorea Minor. At the WGT 2012 in Leipzig, we played the song ‘Endless Life’ from the ‘Sanctuary’ tape together, which a lot of fun.

In 1998, your first album was released: "Hambach 1848", especially for the commemoration 150 years after the failed German revolution of 1848. What was your motivation to work on this theme?

‘Hambach 1848’ for us was really a statement about the democratic movement in Germany. I grew up with those songs in the youth movement and I have often heard them in at home with my parents. The album was definitely a deep reflection on the theme, and for me it dealt with identity and culture.

Unfortunately, some people - even in academic circles - have accused you of far-right ideas back then. That’s odd, since the songs on ‘Hambach 1848’ were songs of a democratic movement. How did you feel about this accusation?

It was a terrible time. There was a lecture by a professor at the Koblenz university on the new right movement in Germany. He saw in us young graduates who sought to disseminate nationalist and new right ideas among the people. Moreover, he said that we would eventually occupy high academic posts in the future to spread our ideas even better in Germany. I am currently working with underage unaccompanied refugees in schools and teaching the German language to the children. That accusation was absurd and deceptive. The criticism came from a man who came from the 68ers movement and so had the age of our parents. They heard the same songs in their youth, and suddenly there is a band with a lot of drums and black clothes that played them too. That was provocative and repellent to those people who were alternative hippies in their youth. In their eyes, it could only be right-wing. It has taken years of effort to show that we were just musicians, artists and individuals who wish to entertain people in the first. Art can be provocative, and that's a good thing.

‘Sonnentanz’ was your first fullalbum with own compositions. It is again a concept album on the "Bündische Jugend", the German youth movements in the interwar period. The CD sings about the romantic side of these movements, their bond with nature and their desire for freedom. Some of these movements were pockets of resistance against the Nazis. Axel, your grandfather was a member of one of these movements. Was he the inspiration for this CD? 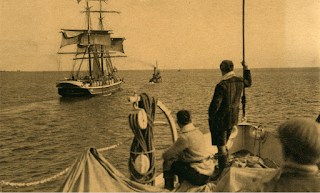 At that time, many bands were copies of the great heroes of neofolk back then. They oriented themselves to the English examples, with more or less success. I liked these musical ideas, but I nevertheless wanted to have a more personal content. I also came from the Bündische Jugend. My father and I were part of the Nerother Wandervogel. My grandfather and his brother came from a group of young people from the ‘1.11’. My family comes from Cologne Ehrenfeld. My grandfather and his brother sympathized with the ‘Edelweispiraten’, then an association of young people who did not want to join the Hitler Youth and fit in the associated Gleichschaltung (equalization). Secretly, they went ahead and have nurtured their own songs and traditions. Yes, I believe it was important for me to produce a work about this movement, which was always a part of my family.

‘Tempeltänze’ (2002) was varied and saw a movement in the direction of medieval and world music. You discovered new instruments and were interested to discover new music. What do you remember from that time? 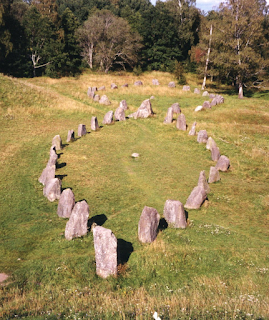 ‘Tempeltänze’ was especially inspired by our interest in paganism and the energy associated with it. At the same time, it was also a clear fracture. I developed musically and wanted to try new things, but the musical skills were somwhat lacking. Achim and Susi are also developed further. Achim and I went out of town to the countryside. I searched for many power places in nature, and so I found as the ‘Mithras Garden’, a Roman temple garden at a source located in the depths of the Soon Forest. It is at that very place that I got the idea for ‘Mithras Garden’. A vision that I had there showed me a future that was connected with much suffering and loss, but also with the hope that this suffering would create a new force that represented an unending flood. ‘In Mithras Garden I saw my Father I saw my mother I pray for our time and Age’. In this time we learned to know Andrea from Hagalaz’ Runedance and we worked with her.

‘Goddess’ from 2004 is based on legends and mythologies. It contains songs about the legends of Morgane, Barbarossa or bull cult on the island of Crete. Montségur tells the history of the Cathars, a religious movement that was persecuted in medieval France. I know you like to call yourself a pagan band. The Hekate name refers to the Greek goddess of the moon, earth and the underworld. Why are you so interested in these themes?

These themes fascinate me for as long as I can think. I have the firm conviction that we can learn from myths and legends for our own lives and for our development. These are stories about our peers and their origins. We emerge from the divinity of nature from which everything arises and to which everything eventually returns. Nature is the source of our inspiration. The sun in mind. The glow of the moon. The earth, my mother. (‘Die Sonne im Geiste. Der Mond im Glanze. Die Erde meine Mutter.’ A reference to a song on' Sonnentanz 'xk.) I was not really satisfied with the production of ‘Goddess’. Thematically, I would have liked to integrate songs about Northern and Russian myths and legends world, but at a time the production costs were too high and it was time to end the studio recordings. Titles like ‘Montségur’ are very important. I could visit Montségur during the last year and this place has infinite power that strengthened me a lot.

After ‘Goddess’ and the celebration of ten years of Hekate, we didn’t hear from you for a long time. Only in 2011 did you come back with ‘Die Welt der dunklen Gärten’, an excellent CD that saw you move further into the neoclassical direction, while the musical variety that worked so well on' Goddess' remained. Did you need much time to make the album the way you wanted? 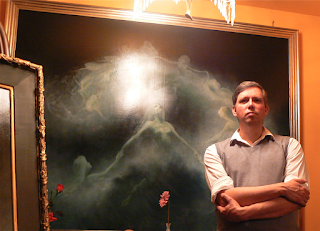 Yes, it was a long time. I was busy with myself and had to process several things that happened to me. A long-term relationship broke up and my parents died. In this era, I played with many musician friends. I accompanied Ordo Rosario Equilibrio and played a few concerts with my solo project Cascadeur. Susi left Hekate after ‘Goddess’, and returned after a few years for ‘Die Welt der dunklen Gärten’, actually at its inception. For me, Hekate felt incomplete without Susi. When the CD came I really had the best group composition to date with Jörg Schwickerath, Dirk Diederich, Achim Weiler and Susi Grosche.

On ‘Die Welt der dunklen Gärten’, as on most of your CDs, different laguages are used. At this date, you have songs in German, English, French, Italian, Yiddish and Latin. How important is that multilingual aspect for you? 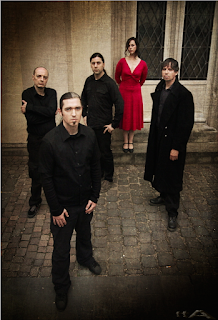 The idea to sing in several languages ​​is close to my heart. With the different languages ​​we can interpret feelings and perceptions in a better way. If the the song deals with a Jewish legend or a French fairy tale, why would we not try to do it in the original language?

You will play on the Belgian Black Easter festival on Saturday, March 26th. What can we expect? A best-of show? Will you play new songs?

We are indeed working on a new CD. We play 50 minutes and will try to play three new songs from the future album. The new ork will deal with the subject of symbolism. In parallel, we are also working on a ‘Sonnentanz’-EP which should represent a cross section of our work. But we will of course also perform songs like ‘Seelenreise’ and ‘Morituri te salutant’, and a song from the ‘Sanctuary’ tape. We very much look forward to the concert in Belgium and hope to play in the Netherlands again this year too. Both countries are very important to us. We love the hospitality and the public in your countries.

Thank you for this very interesting interview!

I must thank you on behalf of our band. It was a pleasure. Love and light from Hekate!