Should we laud this work for its literary qualities, or its musical merits? Well, we have to do both, and all the more because the beautiful story of Jackson Del Rey fits extremely well with the wonderful music of 17 Pygmies.

17 Pygmies saw the light in 1982, as a side project of Savage Republic Member Jackson Del Rey with a few other musicians. Savage Republic played industrial post-punk played, but 17 Pygmies went more towards cold wave with psychedelic and intercultural influences. The critics were full of praise, but to break the group break through. They split in 1990. 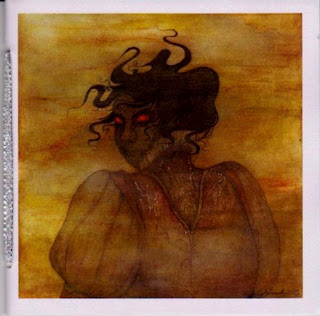 In 2007 the thread was picked up again, with a more literary concept. 17 Pygmies currently works with trilogies. After the 'Celestina' triptych, they are now working on a series called ‘Isabel’, which is actually a continuation of the first trilogy. This ‘Isabel II: Abaddon Rising’ is - as you might have guessed - the second part of the trilogy.

In the short story that accompanies the CD, you can read the underlying tale. Isabel is a woman who fled from Centre and has found shelter in an underground necropolis where displaced scientists have built up their own society. With her stories about Celestina, Isabel knows how to captivate and touch the people in this city. Abaddon is a computer or android that was developed in Centre to teach people to hate and to prepare them as a weapon in the war. However, Abaddon has got software from opponents of His Holiness - the Pope who presides over the Centre - that makes him turn against his boss. Abaddon tries to teach Celestina to hate in order to launch an attack against Centre...

I can not get all the references, since the story regularly refers to characters from previous 17 Pygmies records, but I can emphasize that Jackson Del Rey is a great writing talent, who interweaves his great stories with surrealistic scenes and philosophical considerations.

Musically, ‘Isabel II’ holds midway between the magical atmosphere of the beautiful Russian group Caprice and the melancholic beauty of This Mortal Coil. The strings of Jean Sudbury take an important place in the mix, just like the beautiful voice of Meg Maryatt. The atmosphere throughout the whole CD is quiet and dreamy, and so this is excellent background music while reading the short story by Del Rey. Literature and music mix perfectly on thes work.