Bowie is no more. A legend is dead. And only two days after the release of his new album 'Blackstar'. We knew for some time that Bowie was not in good health, that he suffered from heart problems, that he no longer wanted to tour... But with the new CD, we thought that it was not all that bad. How mistaken we were! Cancer was stronger. For 18 months, the man fought against the terrible disease. He nevertheless managed to make a record during that time. A small miracle.

He was often called the chameleon of pop music, but Bowie said a chameleon does its best to blend in, and he did exactly the opposite. The man changed permanently, both musically and in his looks. He sang and played saxophone in many groups before embarking on his solo career. He took the stage name of David Bowie, because he no longer wanted to perform under his own name David Jones, which also could create confusion with Davy Jones of The Monkees.

With his first album, Bowie did not have much success. Yet, artistically, it was very promising, with strongly orchestrated and absurd songs. Bowie chose to re-record the song 'Space Oddity' with the launch of Apollo 11 to the moon. Producer Tony Visconti was disgusted by the cheap and commercial idea, and refused to work on the song. The song became a hit nonetheless, and Visconti admitted afterwards that he should not have refused. 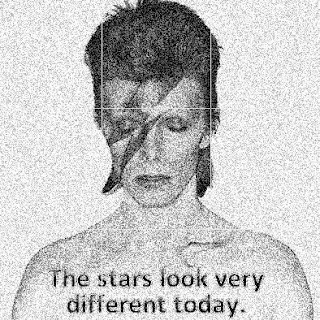 Visconti was also the man behind the controls for ‘The Man Who Sold The World’, a monumental record about which Peter Murphy (Bauhaus) once said that it was the first gothic album of all time. Visconti did more than recording. While Bowie was playing around with his new girlfriend, he and guitar legend Mick Ronson wrote all the arrangements. They gave the disc this huge dark and paranoid feeling. Annoyed by the unprofessional attitude of Bowie, Visconti no longer wanted to work with him (an argument which they only solved years later, during the recording of ‘Diamond Dogs’).

Visconti was surprised that Bowie came up with a colourful and varied record as 'Hunky Dory' soon afterwards. The quality of the compositions was astounding, and with songs like ‘Life On Mars’, ‘Changes' and ‘Oh! You Pretty Things’, Bowie was able to reach a larger audience. But it was with ‘Ziggy Stardust and the Spiders from Mars’ that Bowie really broke through. The extreme and extravagant image of Bowie, that fitted perfectly with the glam rock trend, and his exciting and melodic songs, made him a true superstar.

'Aladdin Sane' was meant to capitalize on the success, but was a wavering album, which, however, contains magnificent songs like ‘Drive-In Saturday’ and ‘Time’. With 'Diamond Dogs', however, he managed to create a strong concept album, about a world that had to be rebuilt after a nuclear accident. The album also contains a number of songs that were to appear on a musical adaptation of ‘1984’, but for which Bowie couldn’t get the rights from the widow of George Orwell.

Bowie wanted to reinvent himself. On ‘Young Americans’, he took the image of a white soul singer. The record was successful, but is somehow forgotten by what would come afterwards. Because 'Station To Station' was a bleak masterpiece, which was clearly influenced by the extreme coke addiction of the singer. The man weighed less than 40 kilos at the time. A Thin White Duke, indeed. But also 'Station To Station' is only a run up. Bowie would move to Berlin...

Bowie takes an unusual initiative. He calls some friends and musicians - among them Tony Visconti and Brian Eno - and asks them if they want to isolate themselves with him for a while in a castle in France. The idea: to make music as experimental as possible. The deal is clear: only if the results would be good enough, would they be released. If not, everybody goes back to his usual stuff. Fortunately, the results were good. Extremely good. ‘Low’ would become the most innovative album of Bowie ever.

The disc consists of two parts. In the first part you can hear relatively conventional rock songs, but full of strange effects that make them sound extraordinary. But the second side is filled with experimental sound fields, which hold just about midway between ambient and neoclassical. ‘Heroes’ continues on this concept and is a phenomenal success, including the global hit the title track made.

Two years later, the Berlin Bowie period closed with ‘Lodger’, which goes back towards conventional rock. The eighties started with 'Scary Monsters, Super Creeps', a delicious pop album with hits like 'Ashes To Ashes' and 'Fashion'. Bowie then moves entirely toward pop with 'Let's Dance', the title track of which again climbs in the charts all over the world. Fans are usually less enthusiastic about Bowie’s work in the rest of the eighties, and Bowie afterwards admitted that it was not his best work.

But in the nineties, Bowie showed that he was still willing and able to innovate. On ‘1. Outside’, he experimented with drum 'n' bass, on 'Earthling', with industrial. With Tin Machine he made solid rock in a group where not everything revolved around him, and with 'Hours' he harked back to the atmosphere of 'Hunky Dory'. The new millennium started with the beautiful 'Heathen', which is quickly succeeded by 'Reality'. Bowie would do a worldwide tour afterwards, which would prove to be his last.
Bowie suffered from heart problems, and is no longer able to perform. It was therefore surprising that he released a new album in 2013 - 'The Next Day' - which essentially build on a sound he had been using for a longer time. With 'Blackstar', that would be different. That really was going to be an innovative disc. We now know that the album was intended as a testament. Listen again to the text of 'Lazarus', and you will know for sure.

Bowie fought against cancer for 18 months. He lost that fight, but will remain alive through his music and the music of all those influenced by him. They are many. The Cure, Joy Division, Smashing Pumpkins, Nine Inch Nails, Gary Numan, Bauhaus and many others have acknowledged his influence. He is sometimes called the godfather of goth, both because his flamboyant clothing and makeup, as for his cold and depressing music. He has unmistakably influenced the music history, and will remain an inspirational figure for a long time.