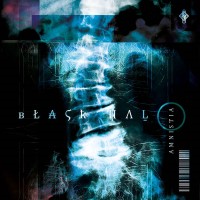 Anyone who attended BIMFest last year could get acquainted with Amnistia. For me, it was not the first acquaintance, however, it was the first time I saw the gentlemen in my own country. I have already met Stefan Schötz and Tino Claus various times during my wanderings in the European old-school electro scene. Most of the time, I encounter the two in East Germany, more specifically at the WGT EBM Warm-Up in Leipzig (their place of residence) and at the Lauscher Festival in Erfurt. I have also stumbled across them in Oberhausen (E-tropolis Festival) and in Bratislava (Dark EBM Souls). But then again, the European dark electro scene is very small and everybody knows everybody. Consequently, it was written in the stars I would review this CD, even though I have bought it myself. Believe it or not, but us reviewers still invest in music, even though we can generally still obtain (digital) promos rather easily.

'Black Halo' is the follow up of 'Dawn', the album from 2016 which I also reviewed for this webzine at the time and on which former third band member Jan Moritz had still collaborated. Amnistia has now been a duo for a while and that has in no way resulted in any loss of quality. Just like the previous album, 'Black Halo' is a guarantee for cast-iron compositions in the old-school electro/EBM setting. Compared with other bands in the contemporary dark electro scene, Amnistia has always been more EBM-oriented. Their tracks have a cutting-energetic touch which you do not encounter with let’s say, Fïx8:Sëd8 or Pyrroline. I certainly think they are talented, but fact is I am personally more into classic dark electro. I have always struggled a bit more with EBM, even though that strongly depends on the kind. For instance, I do not like Nitzer Ebb/Anhalt stuff at all, but fortunately, that is not the case here. Amnistia’s EBM is of a very different (and in my opinion, much more varied) nature.

Even though I have to acknowledge that 'Black Halo' is objectively well-made, I do not like all songs to the same extent. For example, 'The Itch' sounds rather overloaded and 'Last Words Purify' vaguely reminds me of 'Nightfall (Over EC)' by The Cassandra Complex, a song which I have never liked. I also deem 'Suffer' as one of the less memorable compositions. But the majority of the tracks is certainly good or great. My top 3 consists of 'Through The Night', 'Misery' and 'Package Of Regrets'. They are 3 very distinct tracks, each of which in their own way showcases an attractive, ear-friendly old-school electro/EBM sound. An honorary mention goes to 'We Do Not Disturb Our Dead'. This atmospheric, dark instrumental sounds totally different from the rest of the album (as well as different from what I am used to as regards Amnistia). In a way, it would have made more sense if the band would have kept this song for the bonus CD 'Black Halo Encores' (available as part of the limited box set; soon also digitally), but instead, it has become the last track of the actual album. Not that I am complaining.

With 'Black Halo', Amnistia has proven that old-school electro/EBM still sounds exciting and refreshing in 2019. So far, I have heard nothing but enthusiastic feedback and in all objectivity, I myself can conclude that this is a solid, contemporary album in the genre.