Laibach: In reality, nobody really wants to solve a Korean problem.

The big summit between Donald Trump and Kim Jong-un ended on a sizzler. We are not surprised at all, because a few days ago Laibach chief ideologist Ivan Novak told us that nobody really wanted to come to an agreement about North Korea. He knows, because in 2015 Laibach could perform with in the most isolated country in the world, a big stunt for the band that has devoted themselves for almost 40 years to the study of totalitarianism. In North Korea, Laibach played songs from 'The Sound Of Music', which they now release as a new CD. 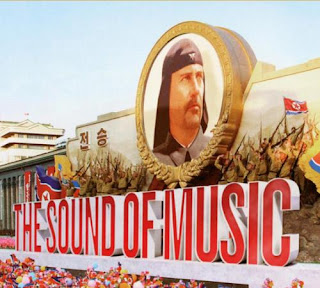 ‘The Sound Of Music’ is perhaps the most kitschy work you have ever done, with children choirs and sentimental keyboards, and of course the songs from a commercial musical from the sixties. Aren’t you afraid to lose the traditional industrial fans of Laibach?

No, not as long as they are true fans. True fans do not question, they follow. And regarding the industrial aspect - this album was created more ‘industrially’ than any other album that we did before. Total industrial process, pure industry! Anyhow - we don’t need anyone whom we cannot keep.

‘The Sound Of Music’ goes back to your concerts in North Korea, where you played in 2015. In ‘Liberation Day’ – the documentary about your trip to North Korea – I was surprised to hear you say that you wondered if we should take the dictatorship out of it’s isolation, since people appeared to be happy, compared to the rest of the world. Since when is Laibach concerned with the happiness of people?

Of course we are concerned about happiness; it is one of the most totalitarian concepts of the perfect, liberated world - on both sides of the hemisphere.

The CD version of ‘The Sound Of Music’ also includes ‘Arirang’, a traditional Korean song that you performed in Pyongyang. There is no mention of the other two Korean songs that you adapted to Laibach ‘new originals’ and which you could not perform due to censorship: ‘Honorable Live And Death’ en ‘We'll Go To Mt. Paektu’. Why were they not included on the CD? 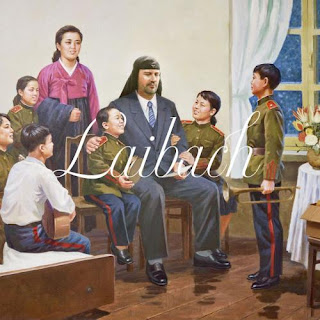 We couldn’t put everything on the album and didn’t find it necessary to include these two songs, as  ‘We'll Go To Mt. Paektu’ was already released digitally, and ‘Honourable Live And Death’ will be released separately in the near future, for another special occasion, related to our visit of North Korea.

You dedicate ‘The Sound Of Music’ to the people of North Korea and Austria. The illustrations in the CD booklet indeed show mountains and landscapes that could belong in both countries. Are there more comparisons between both countries?

Yes, there are plenty of comparisons between both countries and The Sound of Music tells it all.


Laibach is legendary for the role you played in ex-Yugoslavia, which was also a communist dictatorship. Of course a band like Laibach would not be possible in North Korea. What would you conclude when you compare communism in North Korea and communism in Yugoslavia?

Well, after all Laibach WAS possible in North Korea, otherwise we’d never performed there. But communism in Yugoslavia was quite different from the North Korean one, although Tito and Kim Ill Sung were good friends and visited each other in the sixties. Communism in Yugoslavia was destroyed because there was too much freedom around, with an overdose of black humour that finally killed it, as it was practiced and understood too literary.

Let’s go back to your former release: ‘Also sprach Zarathustra’. Laibach is a band that has based its work on the research of the link between ideology and art. I was surprised that you did not exploit the goldmine of controversial statements that this magnum opus by the German philosopher Nietzsche represents to a greater extend. Why was that? 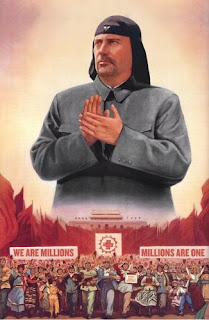 But, we did it, and not only with ‘Also sprach Zarathustra’. You can find Nietzsche all over our work, although we are in principle not Nietzscheans, we consider ourselves Duchampians.

Let’s go even further back in time. Laibach has a tradition in apocalyptic predictions. On the fantastic ‘Spectre’ from 2014, we can hear: ‘Europe is falling apart!’ This innuendo very much seems to become reality. The United Kingdom is leaving the EU, while nationalist movements are on the rise in almost every other country. What do you think about these developments?

It looks like we will have to stop predicting things, because our predictions turn into reality very fast. Europe is in fact constantly falling apart but it seems that falling apart is Europe’s specific way of constituting itself. Every time it tries to re-establish itself, it fails better. But there probably is no other alternative for European countries anyway than a strong European Union.

What Europe needs most of all is a real revolution. The true utopia is that goals of social justice, financial stability and environmental sustainability can be achieved within the parameters of the global capitalist system. The real causes of the people’s misery, after all, are not caused by the corruption of a few hundred politicians or the greed of a few thousand bankers, but in the structural dynamics that enable and reward such behavior in the first place.

Today’s crisis cannot be solved by regulation — or ‘cosmetic surgery’ of any kind. It can only be solved by transformation into a different system altogether. A United Europe can be saved, not as the cold Europe of the Brussels political technocracy and banking sectors, operating according to the dictates of neoliberal dogma, but as a re-politicized Europe, founded on a shared emancipatory project. 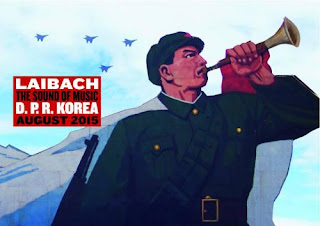 The European Union must find the right balance between debate and consensus on an overall vision. That vision must permeate into all aspects of society. Without this vision Europe cannot progress. Diverse nationalist movements and the right wing expansion in the EU are on the rise exactly because of the lack of common social and political vision and because the prevalent political model in Europe is basically neoliberalism with a right wing management.

The majority of the nationalist politicians, who were elected in the EU parliament, are actually afraid to lose their well-paid jobs and positions, so their anti-European stances are most of the time merely a strategic pose for their frustrated national voters. Brexit is the extreme paradox of this situation. Of course Europe without Britain is not what it should and could be, but in a way Great Britain never really wanted to be a part of EU. Britain wanted Europe to be part of Great Britain, except on safe distance, as a tourist destination and a healthy market for British economical and cultural expansion.


The international situation involving North Korea has changed very much since your shows there in 2015. It was then an international pariah due to tests with nuclear weapons and long-range missiles, but has now entered peace-talks with South Korea and the United States. This détente is fragile, of course, as love declaration still can change to brutal statements and warnings. What do you think? How do you solve a problem like Korea?

You don’t solve it, especially not with Trump. In reality, nobody really wants to solve a Korean problem. The current North Korean leader Kim Jong-un and the South Korean president Moon Jae-in are actually developing a very healthy process that is opening possibilities for reunification of both Koreas into one country. The basic problem is that Americans do not want to close their military bases in South Korea and this will be the biggest obstacle for the reunification.

Americans are not interested in North Korea. They are interested in China and they want to keep an eye over the East China Sea. They are surrounding China with something like 40 military bases and their base in South Korea is among the most important ones. The troublemaking North Korean regime is just a perfect excuse in the whole equation, but not the real target. 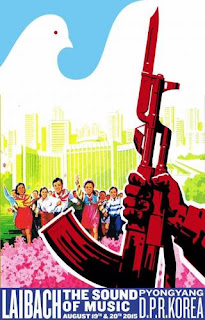 On the other hand China will not allow the reunification of Koreas for as long as US troupes will stay in South Korea. That is why North Korea as a country and its people are basically just a collateral damage of this power game between China and United States, and that is why White House does not want to sign a final peace treaty with North Korea already since 1953.  On top of that Japan is not very happy with the idea of united and economically strong Korea.

China is not very enthusiastic about it either, and the majority of South Korean politicians are opposing the re-unification because of the high costs that South Korea would have to pay into this project and on the other hand the military and political elite of North Korea also do not want to lose their privileged positions and even less their heads if such unification would really happen.  Therefore all the talks that are going on between North Koreans and Americans are merely just a spectacle, showing Trump’s good will and his ‘presidential wisdom’.  Unless Kim Jong-un and his sister are hiding another strong joker in their pockets, there is not much hope that something will really change for the North Korean people.

Laibach is currently on tour. You can find all the tourdates on their website.