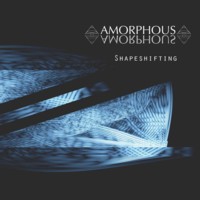 
Amorphous is the solo project of Gil OS, who was formerly active in the Brazilian dark electro band Morgue (later renamed to Morgue Mechanism). It is a pure coincidence that I have gotten his album 'Shapeshifting' for review. In one of my previous reviews, I was talking about my unofficial German "PR agent" with whom I occasionally go to dark electro performances in . While we were on our way to the Lauscher vs Oldschool festival in in late September, 'Shapeshifting' was playing in the car. I did not know Amorphous at the time, but I was pleasantly surprised and planned to buy the album myself. However, this did not prove necessary, as less than 3 weeks later, our promo manager brought this album to the editor meeting. The Brazilian label Wave Records had sent a promo package and much to my surprise, 'Shapeshifting' was also included in the package. It seemed like it was meant to be that I would review this album.

Just like Morgue Mechanism, Amorphous moves within dark electro territory, but the music is broader than that. I hear elements of old-school electro and EBM, minimal synth and even techno. Gil's distorted vocals - typical of the (dark) electro genre - are omnipresent on the album, although in the tracks 'Brave New World' and 'Irreversible', he appeals to the female spoken word of Torsykes and N3VOA lends his vocals to 'Unilateral'. I do not particularly like the female spoken word tracks (although I have to admit that 'Irreversible' has something), but the compelling singing style of N3VOA does captivate me. However, it is the tracks with Gil as vocalist which I prefer. His voice has been treated in various degrees and has also been submitted to other effects (reverb or delay, I think), which in combination with the layered synths that are equally susceptible to effects, provides for a rich sound. Add some samples and you will believe that you are back in the 90s. Even though the music of Amorphous certainly has some more contemporary elements as well (more about that later).

The 2 tracks which I already deemed brilliant at the time of my trip to are 'Amorphous' and 'First Simulation'. 'Amorphous' contains a description - lasting for almost 9 minutes - of the shapeless beings (angels, demons, ghosts, spirits, shadows) that populate our dimension. The spoken lyrics are taken from a poem by Creepypasta Wikia. It is an atmospheric track with unearthly sounding vocals, which unfolds in an ingenious manner and gets creepier as it progresses. Especially when the track arrives at the point where it becomes clear that the amorphous beings - immortal themselves - are intrigued by the death of humans, a process that they sometimes dare to speed up. 'First Simulation' is a reworked version of the track 'Simulation' by Morgue Mechanism, which is on the 'Old School Electrology' box from Electro Aggression Records. This contemporary version is full of techno influences and is truly well-made. It is hard to sit still during this song.

Aside from these, 'Shapeshifting' contains some other memorable tracks that I have only started to appreciate along the way. For instance, there is the lovely dark electro opening track 'Second Nature', the rather minimal 'Antisocial', as well as 'Stimulus', which is once again influenced by techno. The most wayward track, however, is 'Secret Society', which starts with drums and bass guitar (as well as a rather peculiar wah-o-wah sound effect) and only bursts into electronic violence near the third minute. The instrumental 'Shapeshifting' - a collaboration with Morpheus Laughing - is solid as well. On the other hand, I am not so crazy about the EBM songs 'Enlightenment' and 'Dystopia', and neither about the above-mentioned collaborations with Torsykes. But considered as a whole, this album is varied and entertaining and as far as I am concerned, one of the better promos of this year.