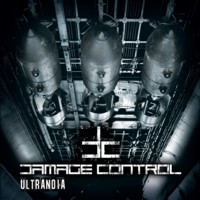 In these modern times, everything is possible, also and especially in the musical field. Whereas in the past, the recording of a studio album required the physical presence in the same space of all people involved, this is no longer necessary thanks to the ever-advancing technology. Damage Control is a global electro/industrial project and you can take this literally. 2 of the band members live in Australia; the other 2 in Europe (United Kingdom and Germany). For the recording of their debut album 'Ultranoia', they have asked even more international friends for help, among others the legendary Chris Peterson (known for his work for among others, Front Line Assembly and Decree, and more recently Ohm) and the equally legendary Claus Larsen (Leæther Strip). Such a thing is destined to set off fireworks, and as you will read further in this review, that is also effectively the case.

Bill Barsby, Damian Davis, Jason Podmore and Markus App are all four experienced musicians and are influenced by a wide array of artists, among others Front Line Assembly, Skinny Puppy and Ministry. There are of course hundreds of electro bands that cite these legendary names as influences, but in the case of Damage Control, this is not an empty statement. Anyone who listens to their debut immediately makes the connection with FLA and co. Powerful old-school electro/industrial, characterized by tight production, mixing and mastering (and that is really not only the merit of Chris Peterson, who was behind the knobs when this album was recorded). These men know very well what they are doing.

From the opening track 'After The Fire', it is clear that this is serious. Especially the first half of the CD is cast-iron, with the firm 'Hate Crime' (a potential electro club hit) and compelling 'City Of Ruins' being my favourites. I am also really captivated by the atmospheric instrumental 'Ruined'. The second half of the album is slightly more experimental, with tracks like 'Trauma' and 'Hell's Gate'. The latter is also the longest song with its duration of more than 7 minutes. Personally, I think it is one of the lesser tracks, as the up-tempo electro has to make room for ambient here. But from a purely technical-objective point of view, this is certainly not bad. Just a bit too long and too calm to my liking.

Last of all, there are 2 tracks to which I would like to draw attention. 'Angst' is a collaboration with Ohm and an insanely good song with delightful vocal effects. It is tracks like these that restore my faith in the contemporary electro scene. And 'Hate Crime' was remixed by Leæther Strip in a professional manner. Claus Larsen put this song in an EBM jacket, so that the remix is just as danceable as the original (for which he also did the additional mixing, by the way).

Damage Control has delivered a very well-made debut with 'Ultranoia'. The band is currently looking for a label and I would be very surprised if they would not succeed. Until then, you can order this release as well as future ones on their Bandcamp.