‘I knew there was something I needed to write, not just a story of the band, but a story of redemption.’ We start where the remarkable book by Lol Tolhurst, founding member of The Cure, ends. Already on the first page, Tolhurst warns us that his book is not just his autobiography. These are his memoirs, his version of the facts.

I was doubting if I would learn something new about The Cure, especially knowing that Tolhurts already was the main source of biographies like ‘Never Enough. The story of The Cure’ by Jeff Apter, a good book about the pop phenomenon Cure, although with some lack of understanding for the darker side of the band.

I was mistaken. With ‘Cured. The story of two imaginary boys’, Tolhurst has chosen a very different perspective. It has become a strongly personal story that starts with the first meeting between Robert Smith and Tolhurst as five year old children that had to take the same bus to a catholic school in Crawley. 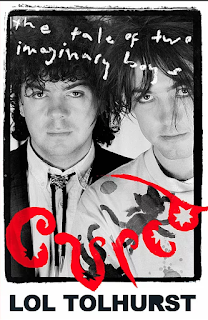 The book is divided into three parts. The first part is entirely devoted to the childhood of Tolhurst and Smith, including the first musical steps, performances and recordings until the contract with Fiction that gave the members the opportunity to become professional musicians and release their own records. Of course you’ll read the necessary anecdotes about the nightlife in Crawley, the first loves and the way the extravagant trio Tolhurst-Smith-Dempsey were treated by the more conformist youth and right-wing skinheads.

In the second and most extensive part, Tolhurst talks about his experiences in The Cure. The story is largely personal, and of course includes infamous episodes like that drunken night when Tolhurst hastily ran into a bathroom and accidentally pissed on the leg of Billy Idol when this last one was about to make love to a groupie. Or the evening when Robert Smith and Simon Gallup fought about unpaid drinks and put an end to the successful trio in the tour that followed ‘Pornography’.

When Smith contacted Tolhurst again to continue as a duo, the story takes a different turn. It is still the story of Tolhurst in The Cure, but the emphasis is more on another aspect of the man in the band, a very destructive aspect which will ultimately lead to the departure of the writer: Tolhursts ever worsening alcohol addiction.

Alcohol already ran like a thread through the book. It started with the alcohol addiction of Tolhurst’s father, a reason why Tolhurst nor his family ever invited friends or relatives at their home. The children had learned to dodge their father, especially when he was drinking. Tolhurst also talks about his first glasses at his brother’s party, and how it led to his first blackout on that very same night.

Tolhurst was - just like the other members of The Cure - a heavy drinker. But after ‘The Top’, and even more so after ‘The Head On The Door’, it all went completely out of control. His addiction seriously hindered his creative input in the band. Tolhurst tells us many anecdotes about drunken nights, accidents or even police interventions and arrests.

Tolhurst narrates how Porl Thompson sat beside him at a pool during the recording of ‘Kiss Me Kiss Me Kiss Me’ and told him that no one would blame him if he would seek professional help. Tolhurst, however, dismissed the problem and thought he could overcome it all by himself.

It is now known to everyone that Tolhurst contributed almost nothing to ‘Disintegration’, the most perfect Cure-album. Tolhurst demolished the album in front of the whole band (perhaps because of the realization that he had contributed too little). The question arose whether Tolhurst could be taken on tour. Tensions in the group were already running high, and finally Robert Smith took the inevitable decision. Tolhurst was fired.

This is where the third part of the book starts. Tolhurst at last seeks a serious treatment and frees himself from the alcohol demon. Alas, he remains envious and jealous. Even if The Cure made him incredibly rich, he filed a court case against the band over copyright issues. He lost the case in an astounding manner, after which he divorced from his wife and child. Tolhurst was completely lost, and didn’t even have a home for a period. He was broke and staying with friends.

In order to pull out of the downward spiral, he gives himself some time off in the desert. It will be a turning point after which he starts rebuilding his life. He finds a new partner with whom he starts to make music  - after a few years - under the name Levinhurst. In 2000, the big reconciliation with Robert Smith and The Cure takes place, and in 2011, Tolhurst even plays with The Cure on the ‘Reflections tour’, performing the entire ‘Faith’ album with the band. The book ends on a positive note. Intentionally.

Lol Tolhurst gave Robert Smith a copy of his book. ‘I know that if he didn't like it, I would have heard from him by now.’ It should be said that Tolhurst remains very friendly towards his former fellow musicians in The Cure. There really is not a single negative word about them in the book. Tolhurst doesn’t even mentions the fact that Simon Gallup was also treated for his alcohol problem a few years after his departure from The Cure, something which surely would have been interesting in this context.

He mentions that The Cure was often involved in fights, something which may not fit the image of the band by the general public. In the early days, the band would sometimes jump into the audience to deal with difficult people. (It was the heyday of punk, right.) The fact that Tolhurst was often the outlet for frustration and aggression of other members of the band, remains unmentioned.

Tolhurst takes almost all the blame for what went wrong. He is not ashamed to tell pretty embarrassing things about himself. However, he does not have the courage to dwell deeply into the trial which he sat up against The Cure. (Or maybe he didn’t want to practice too much ‘accuracy’ when the book neared its ending?) For instance, it is not true that Tolhurst earned the same as the other members of The Cure, as he writes in the book. As a founding member, he earned substantially more than the rest - with the exception of Robert Smith, of course - while his contribution was much smaller. This is perhaps why Tolhurst calls the book his ‘memoirs’ and not his autobiography.

What makes the book exceptional, is the openness with which Tolhurst talks about his alcohol addiction. Some will deem this an extremely interesting book about The Cure, while others will also outline the story of a successful life that was destroyed by alcohol, and then rebuilt from scrap. With the combination of both, we must recommend you the book doubly.