Lacrimosa: The glorious return of the goth masters


It was no less than seven years ago when Lacrimosa last visited Belgium. A long period, especially since the band made their first steps outside Germany right here, and were very popular for many years. With their performance last Saturday in Roeselare, Lacrimosa - now 25 years old - proved they are still able to fill rooms and wrap the audience around their fingers. 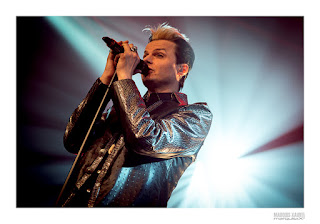 Canterra from Leipzig had the honor to open the evening. A first limited search on YouTube had not made much impression on me, but it was charming and energetic live. I was even thinking about Epica at times, even if Canterra’s music is less technical and the orchestral parts remain limited to simple synth lines. The symbiosis is there, and this band might well grow big in the female fronted metal scene.

Lacrimosa concerts traditionally start with the theme tune. But it doesn’t take long before they start playing songs from their last CD ‘Hoffnung’ with ‘Der Kelch der Hoffnung’ and ‘Kaleidoscope’, two strong compositions in which fast and slow passages alternate . ‘Schakal’  takes us back to 1995. The song announced the transition of Lacrimosa from melancholic darkwave to bombastic gothic metal, as well as the extension of the one-man project of Tilo Wolff to a duo with Anne Nurmi. 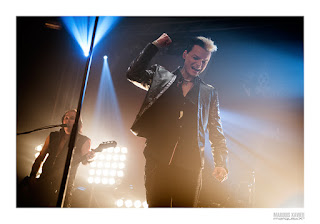 The transition to more guitar-oriented compositions was not well received by all, but gradually, Tilo Wolff managed to convince people that he could make groundbreaking things in this field too. The hit ‘Stolzes Herz’ from 1997 certainly contributed to that. ‘Apart’ is probably one of the most beautiful songs on which Anne Nurmi sings, and comes from one of the most beautiful Lacrimosa CDs: ‘Echos’ from 2003. Due to the symphonic structure of the songs on that album, only few are fit to perform live. 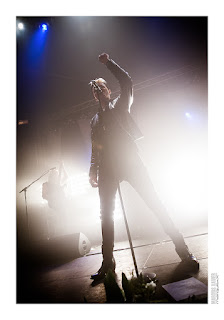 Those who keep complaining that they only like the first three records of Lacrimosa have undoubtedly enjoyed ‘Crucificio’ - even if the vocals were pale in comparison with the original polyphonic version - and the extremely long version of ‘Flamme im Wind’, both from the 1993 CD ‘Satura’.


After some wandering to ‘Elodia’, ‘Lichtgestalt’, ‘Sehnsucht’ and ‘Revolution’ - except for the first two CDs, every Lacrimosa disc was represented with at least one song - Tilo Wolff returns to his latest shoot ‘Hoffnung’. He likes to give some explanation of the concept, because the record is a reflection on all aspects of the phenomenon of ‘hope’. We already learned from our recent interview with Wolff that hope had to do with reaching out to the future. But this future is always uncertain, completely unpredictable, in the same way as it is impossible to think about a color you have never seen. This is what ‘Die unbekannte Farbe’ is about. After several songs from ‘Hoffnung’, the group says goodbye with ‘Irgendein Arsch ist immer unterwegs’, a sing-along that demonstrates how Lacrimosa has conquered the audience tonight.


The encores  start with a very extended version of ‘Apeiron - Der freie Fall’, a song that is performed in two parts on ‘Hoffnung’. The song is long, dark and melodramatic, and you have the feeling that you are listening to a group that it more into long, pitch-black atmospheric pieces than metal. After so much darkness, even ‘Alles Lüge’ sounds as an feel-good tune, as does the very poppy ‘Keine Schatten mehr’ from the new CD. 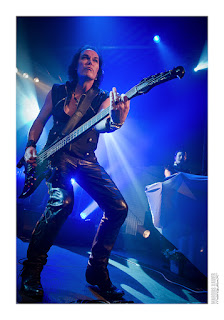 The band receives a long and warm ovation. A second encore set is undertaken. When the first notes of ‘Der Morgen danach’ resonate, a myriad of paper hearts and doves rise in the air, an action of the Russian fan club who came to Roeselare, amongst many other foreign fans. The band leaves the stage for the third time, but the audience just keeps screaming for more. And yes, the group comes back to play one last song. On ‘Copycat’, we see Anne Nurmi pogo with guitarist Genkel and we hear bassist Jenz Leonardt sing a verse.

After another long ovation, Lacrimosa climb the stage once again for the very last song. ‘Der brennende Komet’ has always been a live-classic, and it's not just the audience that goes wild. For the band, this is the end of their ‘Underwelt tour’. Once finished, the band members fall into each other's arms, and after a lengthy goodbye, they leave the stage under a resounding applause. They too enjoyed the evening. Clearly. 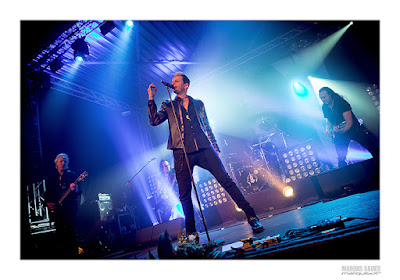